Analysts say that while some of the announcements made by Elon Musk were impressive, investors may have been let down by the lack of surprises.
By : Bloomberg
| Updated on: 24 Sep 2020, 08:19 AM

The chief executive officer laid out a plan Tuesday to build a $25,000 car and cut battery costs in half over the next three years. Analysts said while the technology and manufacturing innovations outlined were impressive, Tesla’s valuation already reflected its ability to disrupt and investors may be let down by the lack of surprises at the much-hyped battery-showcase event.

“With the Battery Day in the rearview, we think there is a lack of upcoming catalysts and are cautious about demand given the recessionary environment," Robert W. Baird’s Ben Kallo wrote in a Wednesday report naming Tesla a bearish “fresh pick."

That was echoed by Patrick Hummel, an analyst at UBS with a “neutral" rating on the stock, who said in a research note Tesla’s leadership in battery technology and costs is fully valued into the stock. “Given the high expectations into the event, we think the market will initially respond negatively to the relatively long timelines of the innovations and the lack of granularity," he wrote.

Musk, 49, said Tesla wants eventually to produce 20 million cars a year. He described a series of innovations that include using dry-electrode technology and making the battery a structural element of the car. Those incremental and longer-term advances belied expectations for a blockbuster leap forward, which Musk himself played up in the weeks leading up to the event.

“The challenge with the stock is that everything they are talking about is three years away," said Gene Munster, managing director of Loup Ventures. “I think traditional auto is in an even tighter spot, but Tesla investors want this tomorrow."

Vertical-integration improvements -- from making its own battery cells on a pilot line at its factory in Fremont, California, to owning rights to a lithium clay deposit in Nevada -- are designed to allow Tesla to cut costs and offer a cheap car as soon as 2023.

“This has always been our dream from the very beginning," Musk said at the event focused on Tesla’s battery technology. “In about three years from now, we are confident we can make a compelling $25,000 electric vehicle that is also fully autonomous."

Musk is teasing prospects for a cheaper mystery model without ever having really delivered on the $35,000 price point he had long promised for the Model 3. Three years after Tesla started taking orders for the car in early 2016, the CEO announced plans to close most of Tesla’s stores as a cost-saving measure, allowing him to offer the car at that cost. He backtracked 10 days later, and the cheapest Model 3 available now is $37,990.

Making a truly mass-market electric car and boosting Tesla’s current annual production to 20 million cars will require vastly more batteries than are currently being produced from a handful of suppliers around the world. So Musk plans to expand global capacity by manufacturing battery cells in-house to supplement what it can buy.

“Today’s batteries can’t scale fast enough," said Musk, who is driven in part by the need to find sustainable energy sources. “There’s a clear path to success but a ton of work to do." Musk said the gasoline-powered internal-combustion engine will one day be obsolete.

Musk described an “incredible series of innovations with varying levels of difficulty," said Venkat Viswanathan, a battery expert at Carnegie Mellon University. While battery-manufacturing advances are feasible and deliverable in the three-year time frame, Viswanathan thinks that chemistry developments will take a longer. 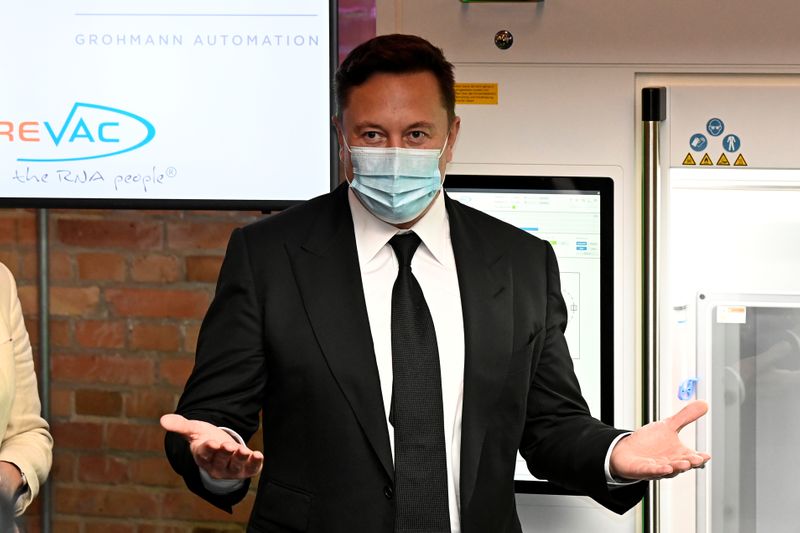 If the planned innovations pay off, vehicle range could increase 54%, cost could decrease 56% and investment in gigafactories could decline 69%, said Andrew Baglino, Tesla’s senior vice president for powertrain and energy engineering.

BloombergNEF estimates Tesla’s pack prices were $128/kWh in 2019. A 56% cost reduction would bring prices down to $56/kWh. In addition to the pilot line for battery-cell production in Fremont, and Musk said the company also will make cells at the factory that is under construction in Berlin.

Most global automakers have shied away from making their own battery cells, citing the high investment costs and their lack of expertise in an industry dominated mostly by Asian electronics manufactures such as Panasonic Corp. and LG Chem Ltd.

Musk said in a tweet Monday that Tesla will need to start producing its own battery cells to support its various products, even as it ramps up purchases from outside suppliers. He wrote that the company expects significant shortages of cells in 2022 and beyond unless it ramps up output of its own.

“I’m really surprised that they’re taking that leap themselves," said Tony Posawatz, a consultant who led development of General Motors Co.’s plug-in hybrid Chevrolet Volt and now sits on the board of Lucid Motors Inc., a Tesla rival. “I think this is going to be a bit harder than what they think, and I don’t think we’ll see a lot of volume out of that for quite some time."

Tesla’s most important and long-standing partner on batteries is Osaka-based Panasonic, but it also has smaller-scale agreements with Contemporary Amperex Technology Co., or CATL, in China’s Fujian province and South Korea’s LG Chem.

The highly technical Battery Day presentation included several nuggets of news that were overshadowed by the talk of cathodes and electrolytes. One example: The “Plaid" version of the Model S sedan -- with a range of 520 miles -- is now available to order, though the vehicle isn’t expected to go on sales until late 2021.

Tuesday’s three-hour event began with the annual shareholder meeting, held outside to allow for social distancing. Shareholders sat in Tesla cars in a parking lot, beeping loudly instead of cheering as Musk spoke.

Investors voted to re-elect Musk and chairman Robyn Denholm to the board and voted against resolutions that would have required more transparency about human rights in the supply chain and the use of arbitration with employees. One shareholder resolution, which requires Tesla to adopt a simple majority vote, did pass.

Musk told shareholders he expects to see deliveries grow on the order of 30% to 40% this year, reaffirming Tesla’s forecast at a time when automakers are struggling to recover from the coronavirus pandemic. “While the rest of the industry has gone down, Tesla has gone up," he said.

Tesla has said it anticipates delivering 500,000 vehicles in 2020, up about 36% from 2019. In July, the electric-car maker said achieving that goal would be “more difficult" due to a pandemic-related production shutdown early in the year. Global sales are projected to drop about 17% this year to 75 million from 90 million last year, according to research firm LMC Automotive.