The original Tesla roadster was the EV giant's first car with occupancy for two and was based on the Lotus Elise.
By : HT Auto Desk
| Updated on: 28 Feb 2022, 12:34 PM 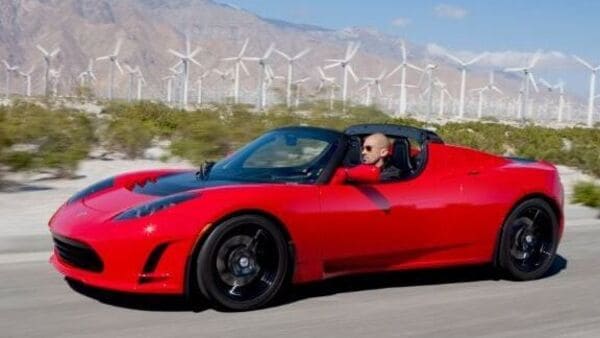 The original Tesla Roadster electric sports car saw roughly 2,400 units produced during its four-year production run between 2008 and 2012 and now it's value as a collector's item is increasing. A Roadster model recently sold for $250,000 via Gruber Motor Company, setting a new record in the used car marketplace. In fact, this is more than what Tesla plans on selling the next-generation Roadster for.

The original roadster was the EV giant's first car with occupancy for two and was based on the Lotus Elise. Though it wasn't a very successful or conventional vehicle and also had difficult rollout with many production problems, the model did give Tesla an establishment. The Roadster changed people’s perception of what electric cars can be like and also helped accelerate several more electric vehicle programs.

The original Tesla Roadster comes with an EPA-estimated range of 393 kilometers or 244 miles with the first li-ion battery pack in a production car. It can accelerate from 0 to 60 mph in 3.7 seconds, and gets a top speed of 201 km/h or 125 mph. The vehicle changed perception of an electric car from more than just a golf cart.

Now, Tesla is working on the next-gen Roadster sports car but the production of the model has been delayed due to several reasons, and the official launch has been postponed to 2023. The new Roadster is expected to get “rocket thrusters" and would be “fastest in the world". The new model will be able to go from 0 to 100 km/h in 1.9 seconds and reach a top speed of 400 km/h. The vehicle will also have a range of 1,000 km, thanks to its large 200 kWh battery.

The estimated price for the new Roadster is $250,000 (R$1.4m). This refers to the first thousand cars to come off the assembly line, which will be a special edition.