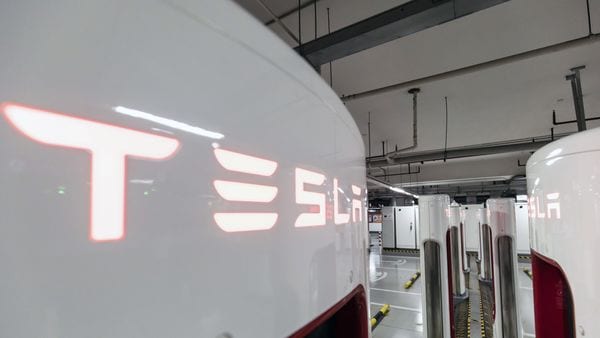 File photo of a Tesla Supercharger station used for representational purpose only.

US EV giant Tesla is expanding its supercharging network to make it easier for customers to adopt electric mobility. The electric vehicle-maker has now opened its first ever Supercharging station in the African continent with four V2 Supercharging stalls with up to 150 kW.

Both the charging stations have been opened in the North African country of Morocco, and are located in Tangier and Casablanca, reported Insideevs. Though Tesla does not have any service centre or showroom in Morocco, it is not clear if it is trying to expand its business in the country by opening EV supercharging stations there.

Another possibility is that the carmaker is trying to extend support for travelers using electric vehicles on the popular route. Even though sooner or later, the EV company could consider opening stores and expand business in Africa as well, that doesn't seem to be the case at the moment.

Tesla has been expanding its Supercharging network in countries like China and US at a very high rate of almost 3 stations per day, as per the average of the second quarter of this year, the report stated. This is nearly 26 EV charging stalls per day. The number of new Supercharging stations is now above 3,000 while the number of individual stalls is pegged at about 30,000.

The Tesla Supercharging stations have been claimed to be a reliable and satisfactory charging solution for those travelling long distances using Tesla's electric vehicles. Gradually, it is expected that the electric vehicle company will also open its charging network to other companies' electric vehicles as well. However, this could be limited to only selected markets initially.