The increase came during a slowdown in China’s overall car sales, which dropped for a second straight year.EV sales were hurt last year as the government trimmed subsidies on purchases.
By : Bloomberg
| Updated on: 17 Jan 2020, 13:09 PM 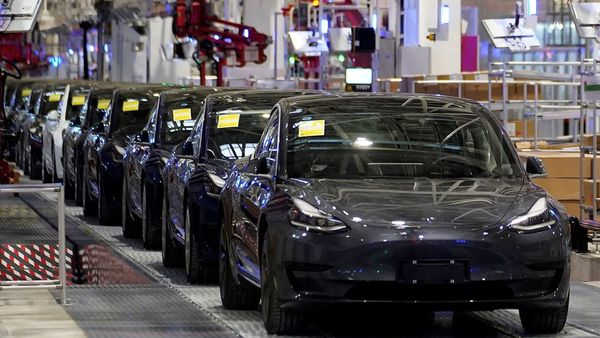 Tesla Inc.’s new car registrations climbed again in China last month to the highest since March despite a slowdown in the wider auto market.

Registrations of Tesla vehicles rose to 6,643 in December, according to state-backed China Automotive Information Net, which gathers industry data based on insurance purchases. Thirty of those were for the first of its locally made sedans: Tesla started handing over cars to employees at its Shanghai plant -- the company’s first outside the U.S. -- at the very end of the month.

The December figure took total Tesla registrations in the world’s biggest EV market to 42,715 for the year, compared with 16,360 in 2018. The increase came during a slowdown in China’s overall car sales, which dropped for a second straight year, according to the China Passenger Car Association. EV sales were hurt last year as the government trimmed subsidies on purchases.

Tesla said in October it would stop selling its most basic imported Model 3 in China, which may have prompted buyers who wanted a U.S.-made version to place orders, boosting registrations later in the year. The California-based company doesn’t provide monthly data by region, but globally it delivered 92,550 vehicles in the fourth quarter, bringing its 2019 total to 367,500.

After the first batch of locally-made Model 3 sedans were handed over to buyers who worked at the company, Tesla started delivering to the public on Jan. 7 at a ceremony attended by Elon Musk, who expressed his gratitude to the Chinese government for helping to get the plant on the outskirts of Shanghai up and running in just a year.

Tesla cut the starting price of its China-built vehicles by 9% from Jan. 3, bringing it down to 299,050 yuan ($43,500) after government subsidies. The Shanghai factory is assembling more than 1,000 cars a week and plans to double that rate over the year, according to manufacturing director Song Gang. The company may cut prices further in the second half of 2020 as it sources more components locally, people familiar with the matter have said.