Tesla is aiming to manufacture as many as 500,000 Model Y SUVs per year at the Texas Gigafactory.Tesla is simultaneously also building another Gigafactory just outside of Berlin, Germany.
By : HT Auto Desk
| Updated on: 23 Nov 2021, 01:20 PM 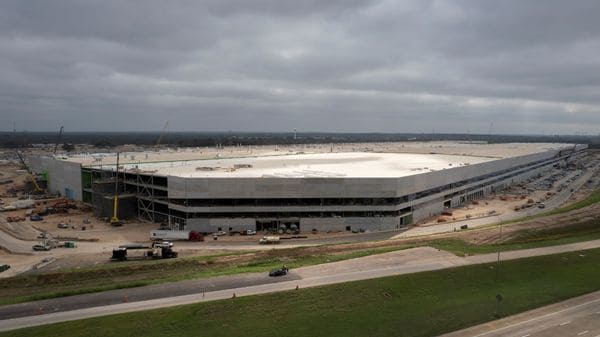 A general view of construction site of the Tesla Gigafactory in Austin, Texas, U.S.

US EV giant Tesla has filed for the approval of the first phase of its Gigafcatory being built in Austin, Texas with the Texas Department of Licensing and Regulation, the Electrek reported. The first phase of the factory will be completed by December 31, as per the filings review by the publication.

This is in line with the EV maker's aim to begin production at the factory by the end of this year. The investment budget of the first phase amounts to over $1 billion with Tesla aiming to manufacture as many as 500,000 Model Y SUVs per year at the factory. Tesla will eventually also produce Model 3, Cybertruck, and Tesla Semi models at the Texas Gigafactory site.

Tesla is simultaneously also building another Gigafactory just outside of Berlin, Germany. The automaker is trying to start production at this factory too by the end of the year as it is important for the company's growth plans. However, the process hasn't been smooth in Germany with Tesla facing various environmental lawsuits and approval for the factory being delayed due to the restart of the public comment process.

It could likely take another month for Tesla to secure the approval from the German administration and start production at the Berlin Gigafcatory. However, there appears to be fewer red tapes in the process of starting production at the carmaker's Texas Gigafactory.

In October, Tesla CEO Elon Musk had announced that he is planning to move the headquarters of the electric vehicle company from Palo Alto, California to Austin in Texas. Texas is known for its cheaper labor and less stringent regulation. Musk had himself moved to Texas from California in December last year to focus on the new facility in the state as well as his SpaceX rocket company, which has a launch site in the southern tip of Texas.