The Tesla Model 3 was seen wading through water as deep as its wheels on the flooded streets of China. China has been hit by heavy rains and flooding that resulted in death of more than 30 people.
By : HT Auto Desk
| Updated on: 22 Jul 2021, 10:11 AM 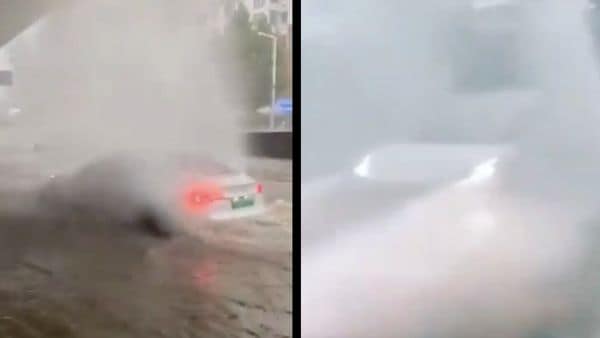 Images from the video of a Tesla Model 3 electric car wading through the flooded streets in China. (Photo courtesy: Twitter/@coderbear)

A Tesla Model 3 was seen wading through the flooded streets in China, battered by heavy rains and flooding in the past few days. A user on Twitter shared a video of the Tesla Model 3 showing how the car tackled water about a foot deep with relative ease.

The video was reportedly shot in China’s Henan province which is the worst-affected region in the country in the recent flooding. It shows how the electric car managed to wade through the water, deep enough submerge the underbody and most of its wheels. While most other vehicles were seen stranded along the way, the Tesla Model 3 created quite a splash as if it had no problem tackling the flood waters.

The user who shared the video jokingly called the car a Tesla 'Boat' Model 3. It is quite ironic because Tesla CEO Elon Musk have said that the electric cars his company produces might as well work as boats. He had said that the drive units and battery packs in Tesla cars are sealed, so the chances of water entering these compartments and harming them is minimal.

The US-based electric vehicle manufacturer usually throws its vehicles to wade through water during internal tests to see if they are able to tackle the challenge without causing trouble.

In China, where Tesla has its only operational facility Gigafactory near Shanghai, the carmaker tests its cars through watered sections that simulates flooded streets to carry out such quality control tests. Tesla produces Model 3 and Model Y electric cars for the Chinese market.

The Tesla Model 3 seen in the video seemed to have passed the test in flying colours. Despite deep water, the electric car performed well enough and moved through quite steadily without a hiccup. However, it is still not known if the car developed any snags later or whether it was damaged in the process.