Tesla said it would meet its goal of delivering half a million cars worldwide this year, a target it wavered on after last quarter’s earnings and Musk last month hinted might not come to pass.
By : Bloomberg
| Updated on: 22 Oct 2020, 07:30 AM 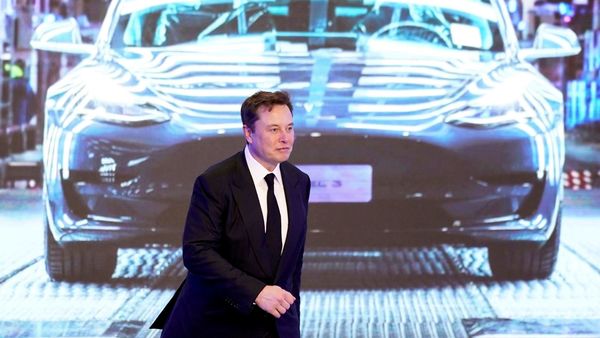 Tesla Inc CEO Elon Musk walks next to a screen showing an image of Tesla Model 3 car during a ceremony. (File Photo)

Tesla Inc. reported a fifth consecutive quarter of profits, handily beating analysts’ estimates, and said it remains on track to deliver 500,000 cars in 2020 despite weaker sales in the rest of the global auto industry.

The earnings streak could add momentum for Tesla’s inclusion in the S&P 500 Index and defies a downbeat trend among other automakers struggling to overcome a pandemic-induced slump. The Palo Alto, California-based company reported third-quarter profit of 76 cents a share on an adjusted basis, surpassing analysts’ consensus estimate for 55 cents a share.

Chief Executive Officer Elon Musk, who has not always enjoyed earnings calls with analysts, praised his management team and basked in the bullish results. “Q3 was our best quarter in history," he said on a conference call Wednesday, ticking off a number of achievements, including production and delivery records and an all-time high free-cash flow.

Shares of the company rose as much as 4.5% in aftermarket trading Wednesday after closing at $422.64. The stock is up 405% so far this year.

“What jumped out to me is gross margins," said Gene Munster, managing partner at Loup Ventures. “That’s the machine that keeps the machine growing. They are making more money from each car."

Tesla’s gross margins inched up more than 250 basis points in the quarter to 23.5%, while operating margins grew to 9.2% -- even after Musk received $290 million for hitting compensation targets.

Tesla said it would meet its goal of delivering half a million cars worldwide this year, a target it wavered on after last quarter’s earnings and Musk last month hinted might not come to pass. The company needs to deliver more than 181,000 cars in the last three months of the year to hit that mark, which would be a 30% jump over the previous quarter.

“While achieving this goal has become more difficult, delivering half a million vehicles in 2020 remains our target," the company said in a statement. This will largely depend on increased production at its Shanghai factory and higher output of its Model Y, it said.

In January, before the onset of the coronavirus pandemic, Tesla predicted it would “comfortably exceed" deliveries of 500,000 vehicles for the full year, a 36% increase from 2019. The company’s likely double-digit growth stands out in a year when global auto-industry deliveries are projected to be 14% below pre-Covid estimates and down 22% from last year, according to LMC Automotive.

In addition to its mainstay Model 3 sedan and Model Y crossover, the company also manufactures the older and higher-priced Model X SUV and Model S sports sedan. Its flagship factory in Fremont, California, now has capacity to make 590,000 vehicles a year: 500,000 3 and Y and 90,000 of the S and X.

Tesla said Wednesday deliveries of its Semi will start next year, four years after the big rig was first revealed. And Musk said initial production of the company’s new Cybertruck pickup is on schedule to begin in late 2021. That batttery-powered truck will go head-to-head against General Motors Co.’s new electric Hummer and a pickup from Amazon.com Inc.-backed Rivian Automotive Inc.

Tesla’s revenue rose to a better-than-expected $8.8 billion, even as sales of regulatory credits to other automakers fell to $397 million. That was down from $428 million in the second quarter.

“Regulatory credits are a big part of the EPS beat," said analyst Ben Kallo of Robert W. Baird. “But that’s part of the game: Tesla’s competitors are paying them, and Tesla is reinvesting that into their factories in Berlin and Texas."

The electric-car maker earns money by selling credits to manufacturers that need them to comply with carbon-emissions standards in California, Europe and elsewhere. Investors view this revenue as a double-edged sword because they want to know Tesla can be profitable from its core business: making and selling cars.

When S&P failed to add Tesla to its index last month, Bloomberg Intelligence analyst Michael Dean said it could be due to “question marks about the sustainability of regulatory emission-credit sales, which are currently underpinning earnings."

The strong profits could prompt the S&P Dow Jones Indices, which oversees the index, to add Tesla sooner rather than later, Garrett Nelson, an analyst at CFRA Research, said in a note to clients. “We think TSLA’s fifth straight quarter of GAAP profitability raises the likelihood of the stock being added to the S&P 500 in the near term," he wrote.

Tesla cleared a big hurdle for inclusion in July when it reported a fourth consecutive quarter of profits, but S&P officials say the index isn’t reconstituted on a pre-determined timeline and have declined to comment on any individual company.

During the earnings call with analysts, Musk spoke about Tesla’s advantage when it comes to vertical integration, saying his goal is to eliminate all outsourcing so that the company’s self-sufficiency is an order of magnitude greater than other automakers.

The company makes many of its own parts, as well as the machines that make the parts -- or the “machine that makes the machine," one of Musk’s favorite phrases. He said that rival carmakers rely too much on “catalog engineering" and as a result their products are not very unique or as adventurous.