The production-spec Tata HBX will be based on the Alfa platform and will rival the likes of Maruti Suzuki Ignis and the Mahindra KUV100 NXT.
By : HT Auto Desk
| Updated on: 16 Dec 2020, 12:56 PM 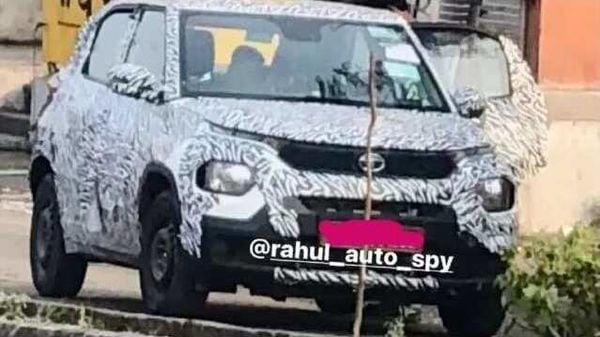 The production-spec Tata HBX will be underpinned by Alfa platform. Image Creidts: Instagram/Rahul_auto_spy

Tata Motors is readying a mini SUV-crossover in the form of the HBX which was spotted getting tested on the public roads recently. The car is based on the HBX concept which was showcased at the Auto Expo 2020. While it was previously slated to be launched by 2020, the pandemic threw a wrench in its launch timeline which was delayed significantly. The car will likely be named Timero and will make its market debut by the second half of 2021.

As the spy image suggests, the prototype seems to be having a similar appearance and dimensions as the concept. The production-spec model will feature split headlamp design sporting a set of LED DRLs on top along with halogen headlights on either side of the front bumper. These lights give it a Harrier inspired front fascia. The front main grille will include a black, single slat unit featuring the company logo. It will feature A-pillar-mounted ORVMs, as well as steel wheels. The latter could be limited to the entry-level models. Its wheel arches have been added with plastic cladding to give the car a muscular appeal.

As per a test mule that was spotted in the recent past, the production-ready Tata HBX will get dual-tone alloy wheels, blacked-out B-pillars, C-pillar mounted rear door handles, rear washer and wiper, high mounted stop lamp, rear bumper-mounted reflectors, and a number plate recess.

On the inside, expect the car to feature a floating type touchscreen infotainment system, digital-analog instrument console, squared AC vents, flat-bottom steering wheel, and steering mounted controls. Under the hood, the car could be plonked with a 1.2-litre Revotron petrol engine which may be paired to a five-speed manual unit and an AMT unit.

It will be based on the company's popular Alfa platform and will rival the likes of Maruti Suzuki Ignis and the Mahindra KUV100 NXT.