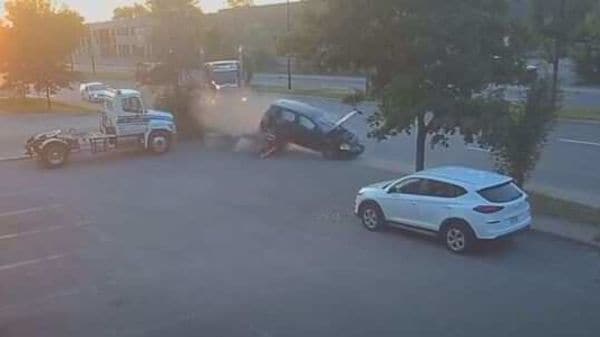 Two cars appearing to move at more than permitted levels of speed in Montreal, Canada, dramatically crashed one after the other as they happened to come in close encounter with a tow truck. The two drivers in the cars were reportedly racing each other.

The incident recorded in a surveillance video shows that the trailer truck was making a wide turn to enter a parking lot on its right when the cars happened to come in its way. On the two-lane road, the truck was positioned on the left-most lane so as to get enough space to move its heavyweight through the narrow parking entrance.

A video of the incident was posted on YouTube.

The driver of the truck remained motionless for a few seconds before executing his turn, as per an eye witness cited by local news outlet Journal Demontreal. “I was 250 yards from the intersection, and I knew the lights were red on either side at the time. I was supposed to have at least a good 10 seconds to shoot," the 50-year-old truck driver Eric Thibault was quoted as saying.

After coming in the tow truck's way, the first car - black in colour, collided head-on with a fire hydrant on the street and got dragged further. The second car - white in colour, following the black car, collided with a tree. The truck driver defended his move by saying that the young drivers came into his blind spot and were racing at above permissible speed of 100 km/h.

An ambulance arrived at the spot but reportedly no hospital transfers were made. Montreal police confirmed that the event did not cause any injuries, the local media outlet reported.