The bench said there has to be a coordinated effort on the part of authorities within Delhi Government, East Delhi Municipal Corporation as well as statutory authorities in Uttar Pradesh having jurisdiction in the area.
By :
| Updated on: 31 Mar 2021, 01:38 PM 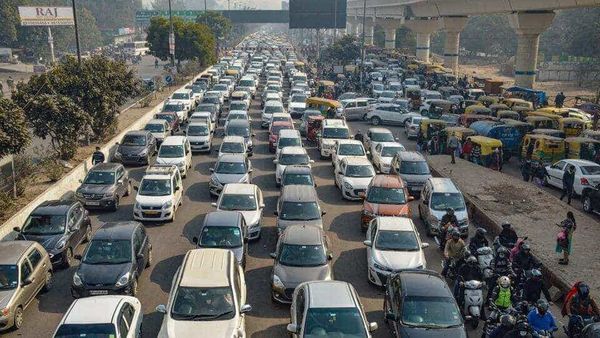 Vehicles stuck in a traffic jam as Delhi Police intensify checking after closing the border amid farmers' agitation against the new farm laws, at Anand Vihar in New Delhi on February 1. (PTI)

The Supreme Court has taken note of the traffic management problem in Ghaziabad's Kaushambi area and constituted a committee comprising representatives of the statutory authorities of Delhi and Uttar Pradesh so that a “coordinated and concerted effort" can be made to resolve the issue.

The apex court, which said that a “comprehensive traffic management plan" should be presented before it, observed that a resolution of the issue would not be possible unless all the authorities concerned jointly agree on a concrete effort to manage the traffic problems.

The bench, also comprising Justices M R Shah and Sanjiv Khanna, said that Ghaziabad’s District Magistrate shall be the nodal officer of committee.

“In the circumstances, we are of the view that, within three weeks, a comprehensive traffic management plan should be presented before this court. We propose to constitute a committee consisting of representatives of statutory authorities in the state of Uttar Pradesh as well as from the Government of NCT of Delhi so that a coordinated and concerted effort can be made by the authorities in both the jurisdictions to resolve the issue through a unified approach," the bench said in its order passed on March 24.

The bench was hearing a petition which highlighted several issues -- ranging from haphazard traffic management to environmental pollution and unrestricted dumping of municipal solid waste -- and claimed that residents of the area are suffering from serious respiratory issues.

“Essentially, the issues which have been highlighted bring focus upon improper planning and the poor implementation of development plans and statutory provisions. In order to obviate an unmanageably large canvass being opened before the court at once, we have decided to take up the problem of traffic management in the first instance," the bench noted in its order.

The counsel appearing for the petitioners told the top court that residents of the area are suffering due to several things, including haphazard parking of three wheelers and other vehicles on public roads, absence of adequate spaces for parking of public service vehicles and use of pressure horns by vehicles.

The bench noted that earlier, a matter had come up before the National Green Tribunal (NGT) in which issues like pollution caused by vehicular emissions, illegal parking, encroachment of roads and pavements, use of diesel generators in violation of CPCB standards was raised and the tribunal had constituted a committee.

“The efforts which have been undertaken by the NGT in the exercise of its statutory jurisdiction need to be appreciated and must continue. However, it is evident that the situation on the ground has not changed substantially, as a result of the problems which we have noticed in the earlier part of the order," said the bench, which posted the matter for hearing on April 14.

“Merely treating the matter as a law enforcement issue, particularly in the area of traffic management, will not solve the problem," it said, adding, “Experience shows that a direction by the court to the law enforcement machinery may result in some action, even high-handed action for a few days, until the position is restored to the original status which becomes the new ‘normal’."

It said that a comprehensive traffic management plan has to be drawn up to deal with the situation.

“This will be in addition to the directions issued by the NGT and will not detract from them or from the supervision by the NGT," it said.

“Before we address the issues which are raised, we are categorically of the view that the problems which have confronted Kaushambi and Ghaziabad, in general, cannot be treated in a manner isolated from the wider context of the National Capital Region. This is not merely a matter which pertains to the Ghaziabad Development Authority or, for that matter, other authorities within the State of Uttar Pradesh alone," it said.

The bench said there has to be a coordinated effort on the part of authorities within Delhi Government, East Delhi Municipal Corporation as well as statutory authorities in Uttar Pradesh having jurisdiction in the area.

“Unless all the authorities put their heads together and jointly agree on a concerted effort to manage the traffic problems, a resolution would not be possible," it said.

It said some of these problems do not necessarily originate in Ghaziabad, such as the problem which is caused by the back-up of vehicles at toll booths.

“The Anand Vihar Terminal, the court has been apprised, takes care of the need of the buses of the Delhi Transport Corporation and inter-state buses which originate and terminate at the terminal. However, we do find that there is a total absence of adequate space for the parking of other public service vehicles including intra-state buses within Ghaziabad, as a result of which the vehicles are parked in a haphazard manner on public roads, including service roads," the bench said.

“Merely treating it as a matter of law enforcement will not provide a long-lasting solution. Ad hoc reactions to a deeper malaise will bring no relief to the residents, users of public transport and those providing public transport," it said.