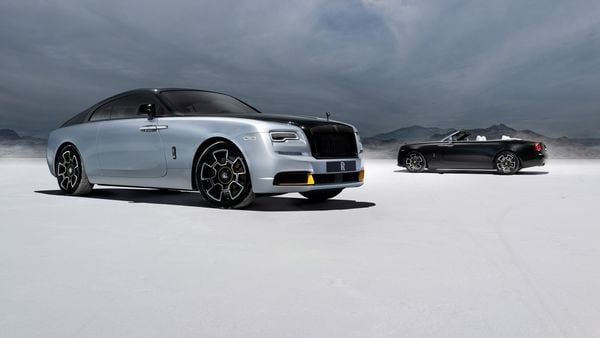 With Black Badge trims to mark Eyston's records, the Wraith and Dawn of the collection have aesthetics that link them to the landscape of the Bonneville Salt Flats in Utah as he pursued his speed records there in 1937-38. These versions draw power from a twin-turbocharged 6.6-litre engine. The Wraith Black Badge can generate 623 hp of power and has 870 Nm of torque, while the Dawn Black Badge can create a power of 593 hp with 840 Nm of torque.

The Collection car duo has been created with a two-tone finish that is black diamond metallic with Bonneville blue which is a new bespoke colour. The luxury automaker said that this hue is significant to the collection as it undergoes transitions under sunlight from light blue to silver which illustrates the reflections of both the sky over Bonneville and the crisp salt flats on Thunderbolt’s aluminium body.

The Wraith Landspeed has a starlight headliner that recreates the sky above the Bonneville Salt Flats on 16 September 1938. On this day, Eyston with his Thunderbolt set their third and final world land-speed record which stood at 575 kmph. The collection of stars has been marked using 2,117 individually placed fibre-optic ‘stars’. The brand said that it is the largest number of stars that a headliner of a Rolls-Royce Wraith Starlight has ever featured. Silhouettes of the Thunderbolt with its three record-breaking speeds have been laser-engraved on the front tunnel of the cars.

Torsten Müller-Ötvös, CEO, Rolls-Royce Motor Cars said that with numerous subtle design elements and narrative details, the collection intends to revive Eyston’s memory and retell his story. “The Collection, which includes both Wraith and Dawn Black Badge, celebrates someone with exactly that dauntless, fearless, pioneering spirit. His name was Captain George Eyston, a Cambridge University graduate, racing driver, gifted inventor and engineering genius. In the late 1930s, he broke the world land-speed record three times with his car Thunderbolt, powered by two Rolls-Royce R V12 aero engines. He was a true hero from an age of epic endeavours; yet both he and Thunderbolt have been all-but forgotten for more than 80 years," he said.