Having graced the prow of Rolls-Royce motor cars since 1911, the iconic Spirit of Ecstasy will now have more prominence in the new brand identity.
By : HT Auto Desk
| Updated on: 26 Aug 2020, 10:05 AM

Rolls-Royce has announced its new brand identity to appeal to younger audience.

Rolls-Royce appointed Marina Willer, partner at Pentagram – a multi-disciplinary design studio which is revered within its field – to create a new brand identity that could move beyond the mechanics of being the ‘Best Car in the World’, to encapsulate the brand’s presence and standing as a true House of Luxury. The identity was designed to appeal to the new demographic of clients and all that they represent both digitally, and physically.

Pentagram embarked upon a deep exploration of Rolls-Royce, including its products – both new and old, its design ethos, its designers, items that are sacrosanct to the marque, and, the unique relationship the marque maintains with its clients. They spent time in the manufactory, understanding the very essence of Bespoke and how this was key to the establishment of contemporary Rolls-Royce.

Marina Willer said, “What soon became apparent is that Rolls-Royce has evolved from being regarded as an automotive manufacturer into a leading light in the world of luxury. It was essential for us to ensure that the brand's new identity reflected this shift. We needed to present Rolls-Royce in a forward-facing, fresh and relevant way - speaking to new audiences while respecting the company’s loyal clients."

Torsten Muller-Otvos, Chief Executive, Rolls-Royce, commented, “As the marque's digital presence increases, there has never been a more important time for the visual language of the company to reflect our standing as the leading luxury brand in the world. We have embarked on a fascinating journey of modernising our brand identity to echo those changes seen in our portfolio, our client demographic, their lifestyle and the luxury world that surrounds them." 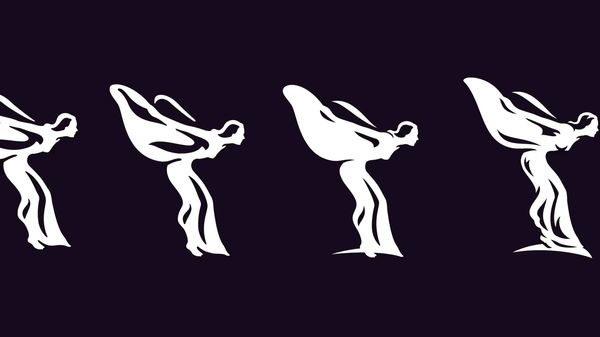 The Spirit of Ecstasy is an instantly recognisable, modern icon of British luxury.

The Spirit of Ecstasy is an instantly recognisable, modern icon of British luxury. Having graced the prow of Rolls-Royce motor cars since 1911, today, she remains one of the world's most famous symbols, embodying beauty, luxury, style and perfection.

The Spirit of Ecstasy will now gain increased prominence in the marque's brand identity. While the sculpture that leads each motor car in silent grace remains unchanged, an iteration of the enigmatic figurine has evolved into the form of an illustration – one that reads clearly in today's virtual world.

The original figurine was drawn and sculpted by British artist Charles Sykes. In homage to this historical commission, Chris Mitchell, a leading illustrator of brand and identity icons, was called upon by Pentagram to envisage the distilled form of the iconic statuette. Working closely with Pentagram’s direction, Chris, drawing on her quiet power and authoritative nature, paid close attention to her proportions which embrace strength and power that cannot be deemed fragile or meek. When depicted in two-dimensional form, her direction has changed from left to right, boldly facing the future, reflective of the marque itself.