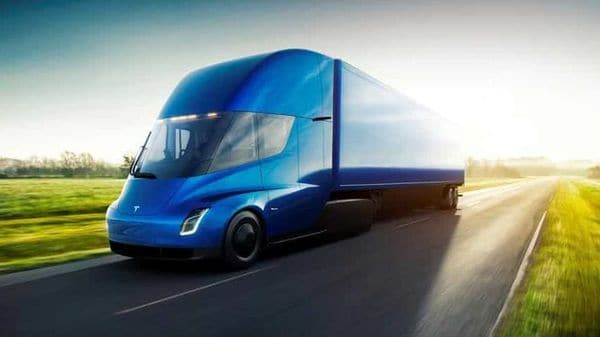 File photo - The Tesla Semi, the company's electric big-rig truck, is seen in this undated handout image released on November 16, 2017.

PepsiCo has reportedly confirmed that as many as 15 Tesla Semi electric trucks will join its fleet by the end of 2021. Tesla Semi has created quite a lot of buzz in recent times and the class 8 truck with an 80,000-lb capacity is expected to have at least a 300-mile range (480 kilometres) per charge.

Tesla Semi was first showcased in 2017 and the California-based EV giant has confirmed the first batch of production-ready Semi units will start getting delivered to customers this year. It is also learnt that PepsiCo has placed an order of 100 units overall and the company, as per a report in Electrek, confirmed, the first batch is expected by end of the year.

(Also read: Tesla Semi truck with 1,000 kilometre-range being put to test on tracks)

There is, however, no confirmed timeline for deliveries for customers who have placed orders for the Tesla Semi. The production version is yet to be unveiled although production itself is expected to start soon at the company's brand new facility in Texas. While the more affordable version will have a 300-mile range, there will also be a more expensive model with a 500-mile (800 kilometres) per-charge range.

While a long per-charge range could be quite the clincher for companies looking at electrifying their respective transport fleets, a few - Bill Gates being the most prominent of them all - have raised doubts about large and heavy vehicles being able to last the distance purely on battery power. Tesla CEO Elon Musk, however, has fought back against such doubts. He even stated that Gates 'has no idea about electric trucks.' (Full report here)