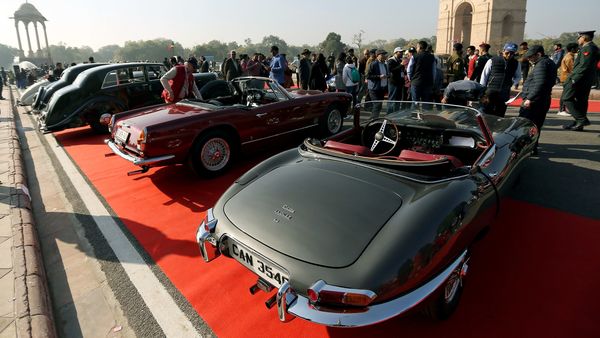 From 1930 Cadillac V-16 Roadster from the US to a 1939 Buick Roadmaster convertible sedan from Canada, besides a bevy of other vintage four-wheeled beauties on Saturday rolled across the streets of Delhi as part of a mega event to promote motoring heritage in the country.

More than 140 vintage cars, including eight from abroad, and 35 heritage bikes are participating in the ninth edition of the two-day 21 Gun Salute International Vintage Car Rally & Concours d'Elegance.

Owners of some of these well-preserved cars from Cadillac, Rolls Royce, Bentley and Volkswagen and other manufacturers, took a ride from the India Gate, where the event was flagged off by KTS Tulsi, president HMCI (Heritage Motoring Club of India), to Karma Lake Lands in Gurgaon.

At the Gurgaon venue, other rare beauties on display include, Bikaner horse cart, wedding palanquin and erstwhile Maharaja Of Gwalior's howdah.

The oldest car in the rally has been showcased by industrialist Gautam Singhania, who has brought his 1903 Cadillac and 1936 Rolls Royce. Yohan Poonawalla has also brought his few cars, including two Rolls Royce beauties, and Ratan Tata''s brother Jimmy Tata is showcasing 1967 Dodge Charger, they said.

"I have had the opportunity to observe some fascinating vintage cars. These have been exquisitely restored and preserved and the heritage of vintage and classic cars are being kept alive because of the commitment of the owners and those who work behind the scenes in maintaining these beauties," Tulsi said.

Madan Mohan, Chairman and Trustee of the 21 Gun Salute Heritage and Cultural Trust emphasised on inculcating the value and importance of the heritage motoring and its evolution to the younger generation.

Seeking to promote India as a global heritage motoring tourism destination, on February 17, a nearly 4,000-km expedition of some of these iconic vintage cars will kick off from here, traversing through 17 historic cities across the country and making several pit stops at royal palaces.

The 23-day ''Incredible India Rally'' organised by the 21 Gun heritage trust will culminate in the City of Lakes, Udaipur, on March 10 where the participants, comprising nearly 15 global vintage car aficionados and some Indian heritage automobile enthusiasts, will experience the festival of Holi in all its glory.