Home Auto News Prices Of Petrol And Diesel Should Be Brought Under Gst, Says Congress

Prices of petrol and diesel should be brought under GST, says Congress

Petrol and diesel prices have seen nine successive price hikes till June 15.Congress demands that the 12 hikes in excise duty by Modi government since May 2014 on petroleum products should be withdrawn immediately until it is brought under the GST regime.
By : ANI
| Updated on: 15 Jun 2020, 08:25 AM 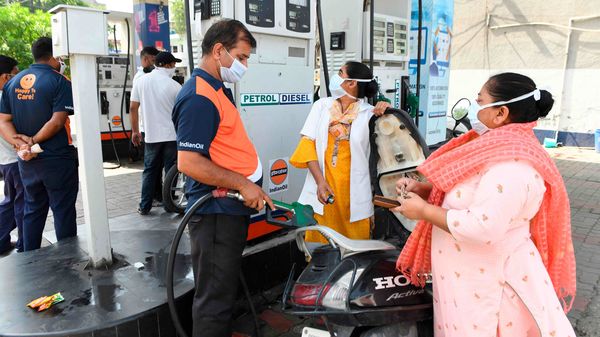 A gas station attendant (C) fills a motorbike tanks at a petrol station in Amritsar.

Congress on Sunday demanded that petrol and diesel should be brought under the Goods and Services Tax (GST) while attacking the government over increase in fuel prices.

The party also demanded, in its official press release, that the 12 hikes in excise duty by Modi government since May 2014 on petroleum products should be withdrawn immediately until it is brought under the GST regime.

The release also stated that the benefit of reduced international crude oil prices should be passed on to the people and the rates of Petrol-Diesel-LPG gas be reduced to August 2004 level.

"The Modi government must reduce the prices of petrol, diesel and LPG to August 2004 level. It is important to remind that the current crude oil prices at about 40 US dollars is similar to August 2004 level and yet consumers are paying a heavier bill," read the statement issued by Randeep Singh Surjewala, in-charge Communications AICC.

Congress said that the poor, migrant workers, shopkeepers, farmers, small and medium businesses and those who have lost their jobs are struggling to survive the "economic ruin" unleashed by the Modi government.

"But instead of reducing their burden the draconian and anti-people BJP Government is fleecing the people by not just raising fuel rates on daily basis but also refusing to share benefits of lower crude with people," read the statement.

"Petrol and diesel prices have been hiked by ₹4.52 per litre and ₹4.64 per litre respectively during the last 8 days itself despite crude oil prices being benign," it said.

The Congress leader stated that the Modi government has hiked taxes on petrol and diesel 12 times and has collected a whopping ₹17,80,056 crore in just the last 6 years between the financial year 2014-15 to the fiscal year 2019-20.

"When people are reeling under difficult conditions, the government has no right to further burden them under high taxation. If the Modi govt, which made false promises of cheaper fuel bills rolls-back the increased excise duties during its tenure both petrol and diesel prices will immediately come under ₹50 per litre," he stated.

"It is noteworthy that on 26th May 2014, when PM Shri Narendra Modi assumed power, the oil basket price of Indian Oil Companies was 108 US Dollar or Rs. 6,330, which means the oil per litre, was costing Rs. 39.81. As on 12 June 2020, the oil basket rates for Indian Oil Companies is 40 US dollar per barrel i.e. Rs. 3038.64 per barrel. As we all know that one barrel has 159 litres that means the cost per litre today is Rs. 19.11 per litre. So, the petrol, diesel and LPG rates can be hugely decreased in comparison to the reduced purchasing price," read the statement.

"Will PM Narendra Modi and his government explain why petrol and diesel cost less than Rs. 20 per litre to India, is being sold at steep rates of Rs. 75.78 per litre for petrol and Rs. 74.03 per litre for diesel?" it said.

Taking to Twitter, Congress tweeted: "The amount our country has suffered because of PM Modi and BJP's arrogance and ego is immeasurable. We have seen lives lost, livelihoods decimated and an economy destroyed but this remorseless govt always fails to feel the people's pain."