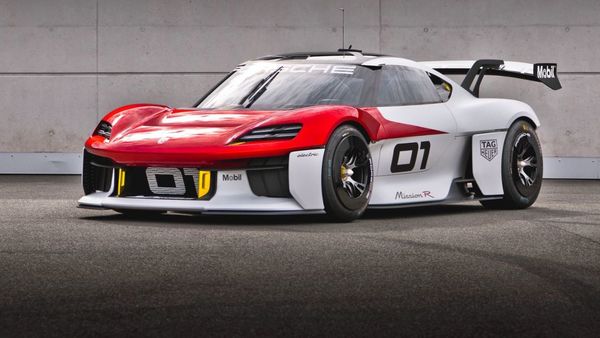 With the unveiling of new concept vehicles with extreme futuristic looks to showcasing upcoming electric vehicles, its busy time for auto companies at IAA Munich 2021 show. Porsche too is making a strong statement here and has introduced its Mission R concept car that is a combination of state-of-the-art technologies and sustainability.

With racing in its DNA, this all-electric competition car from Porsche will feature two newly developed electric motors that will give the EV a power output of 1072 hp in its so-called qualifying mode. A battery capacity of around 80 kWh and a new recuperation system will enable the concept EV for sprint racing without any loss of output, said the automaker. This electric vehicle concept comes with an all-wheel-drive and can zip to the speed of 100 kmph from zero in less than 2.5 seconds. It has a top speed that is over 300 kmph. 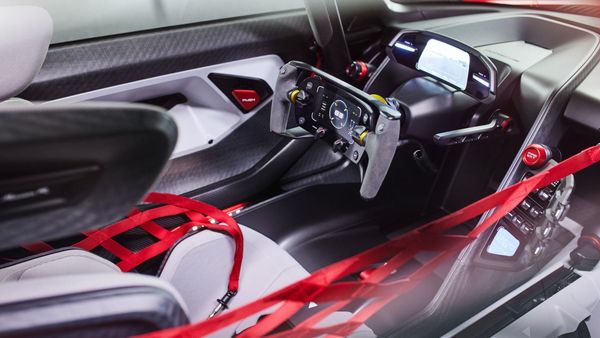 The interior technical specs of the concept EV are driver-focused. (Porsche)

In addition, Porsche has used sustainable products to manufacture the body of the car. It is largely made of natural fibre reinforced plastic (NFRP), the basic material of which is made from flax fibres that have been obtained from farming. Porsche has also used this material for the front spoiler lip, the diffuser and the side skirts. NFRP has been extensively used in the interior of the Mission R concept vehicle, such as the interior door panels, the rear bulkhead and the seat.

The interior technical specs of the concept EV are driver-focused. The controls on the steering wheel will show relevant data to the driver during a race. The monitor above the steering column will show images from the side mirror cameras and the central rear-view mirror camera. A touch display located at the right of the seat can be used to get a driver's biometric data among other information. Porsche has provided multiple cameras in the interior so that a user can go for a live stream transmission.

Porsche Mission R concept is also as quick in terms of charging as its speed. This EV can be charged from 5 percent to 80 percent in 15-minutes in the middle of a race. It will also feature a developed Porsche Active Aerodynamics (PAA) with Drag Reduction System (DRS) on the nose section and rear wing that will provide it raging swiftness.