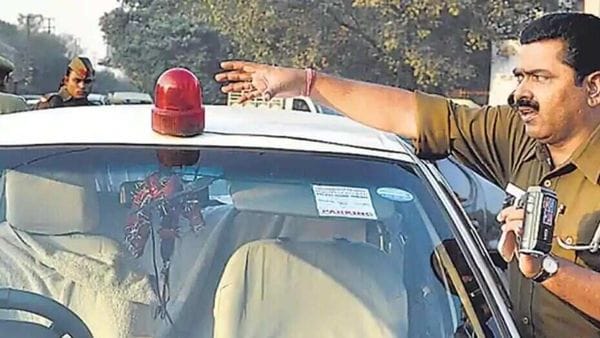 The obsession of being famous on social media platforms such as TikTok and Instagram has many times landed people under police custody for going above and beyond the law. In a similar incident, a 17-year old teen was recently held by the Gurugram Police when he was trying to speed away from a Police barricade in a White VW.

The teen got hold of a red beacon through an aftermarket car accessory shop and wanted to shoot to fame imitating a Haryanavi song 'laal batti wali gadi ke sapne they mere' (I had dreams of a red beacon car). The teen planned to use the red beacon on his dad's car to record videos of cops jumping aside and giving him way.

While he started shooting the first few frames for his TikTok account, a Police team was monitoring the traffic movement near the Atul Kataria Chowk in Gurugram. Since the lockdown has been partially relaxed in parts of the city, restricted movements is allowed from 7 AM to 7 PM and the number of checkposts and Police barricading have been reduced.

"Our Police team saw a white car approaching, it had a red beacon . It seemed odd since the red beacon has been banned and only a few people have the authority to use it and we usually have prior information of their movements in advance.", said Narendra Chouhan, in-charge of crime unit at Sector 17 Police station in Gurugram.

The teen hoped that Police would set aside and give him way seeing the red beacon, but instead the Police waved the vehicle to stop which made the driver nervous and he tried to speed away from the Police belt. "But we managed to stop him" Chouhan said.

The Police called his parents and charged them a fine of ₹7,500 for underage driving and speeding. It settled the matter with just a warning. The teen penned-down an apology in return.

(Also Read: Porsche 718 Boxster driver made to do sit ups for joyride during lockdown)

In order to curtail the VIP culture in the country, the Indian Government has banned the usage of red beacons on cars save for emergency services vehicles such as Ambulances, Fire engines, and Police cars etc.