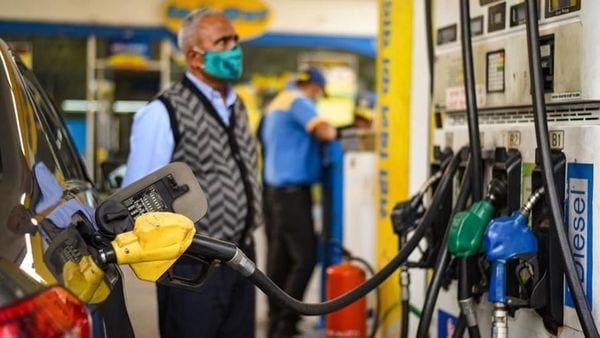 Petrol price has gone past ₹100 per litre in Delhi and Kolkata on Wednesday. (Amal KS/HT PHOTO)

Petrol price today has gone past ₹100 per litre mark in two more states as Delhi and Kolkata became the latest cities in India to join the club. On Wednesday, the oil companies again increased the prices of both the fuels. While petrol price went up by 35 paise per litre, diesel price will now be costlier by 17 paise per litre.

According to the latest fuel price hikes, the petrol price in Delhi today will be ₹100.21 per litre, while diesel will cost ₹89.53 per litre. Petrol price in Kolkata has now been revised to ₹100.23 per litre. Diesel is also nearing the triple figure mark at ₹92.50 per litre in the capital of West Bengal.

Among the other cities, petrol price in Mumbai has now gone past ₹106 per litre and is currently priced at ₹106.25 per litre. Diesel too is just ₹3 away to hit the three-figure price mark and will cost ₹97.09 per litre from today.

Bhopal remains one of the most expensive state capitals to buy petrol and diesel. After Wednesday's hike, the price of a litre of petrol in the capital of Madhya Pradesh is at ₹108.52. Diesel price is also inching towards ₹100 mark and is priced at ₹98.30 per litre.

The hike on Wednesday is the 36th increase in prices since May 4, when state-owned oil firms ended an 18-day hiatus in rate revision they observed during assembly elections in five states. In 36 hikes, the price of petrol and diesel have gone up by more than ₹9 per litre.

The prices of petrol and diesel have been going up almost every alternate day for the last few months. One of the key reasons behind the spate of fuel price hikes is attributed to the fluctuations in the global crude oil prices and foreign exchange rates. In India, the central and state-level taxes also contribute a large part that shoots the rate of fuel go up by almost double the actual price. These taxes include freight charges, excise duty, variable VAT rates by state governments, dealer commission among others.