Home Auto News Pakistan Puts Ban On All Imported Cars. Here Is Why

Pakistan has imposed a ban on the import of all non-essential luxury items, which also include imported cars, on Thursday. Prime Minister Shehbaz Sharif made the announcement of the decision.
By : HT Auto Desk
| Updated on: 20 May 2022, 05:07 PM 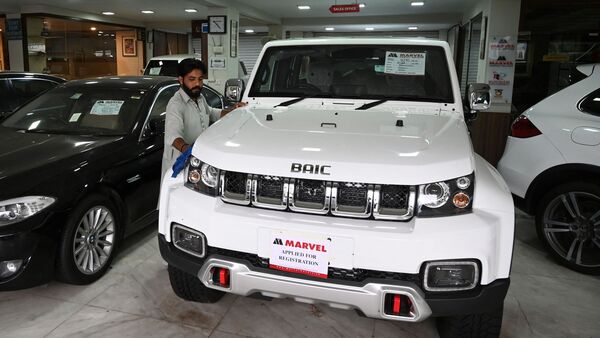 An employee cleans an imported vehicle at a car showroom in Islamabad.

Pakistan has slapped a ban on imported cars as part of its plans to revive the economy. The ban, which was announced on Thursday, extends to all non-essential items including imported vehicles and other things like mobile phones, home appliances and weapons. Prime Minister Shehbaz Sharif announced his decision saying it will help Pakistan to save 'precious foreign exchange'.

Pakistan's Information Minister Marriyum Aurangzeb confirmed the ban shortly after Prime Minister Shehbaz Sharif took to Twitter to announce the decision. She said, “Yesterday, it was decided that for the first time in Pakistan’s history, all non-essential and luxury items will be banned completely. These include food items, luxury items and all imported cars."

“Local industry, local producers and local industries in Pakistan will benefit from this [policy]. This economic plan will also promote employment in the country," Marriyum Aurangzeb added.

Earlier, Sharif had tweeted, "We will practice austerity and financially stronger people must lead in this effort so that the less privileged among us do not have to bear this burden inflicted on them by the PTI government."

Pakistan is facing an economic crisis. It has seen its foreign exchange reserves plummet in recent weeks amid import payments and debt servicing. Foreign exchange reserves held by Pakistan's central bank has gone down to its lowest since June 2020. It is currently in talks with the International Monetary Fund (IMF) for a $6 billion loan to revive the economy.

Pakistan does not have a thriving auto industry like its neighbour India. It mostly depends on imported vehicles. Pakistan imports vehicles from across the world from brands like BMW, Mercedes Benz, Audi, Suzuki and more. It is also a very big market for used imported cars, which have seen a massive rise in sales in recent times. According to Pakistan Bureau of Statistics (PBS), the import of cars through CBU route had increased by 50 per cent between July and March this year. Import of cars saw a jump of 158 percent in FY21.