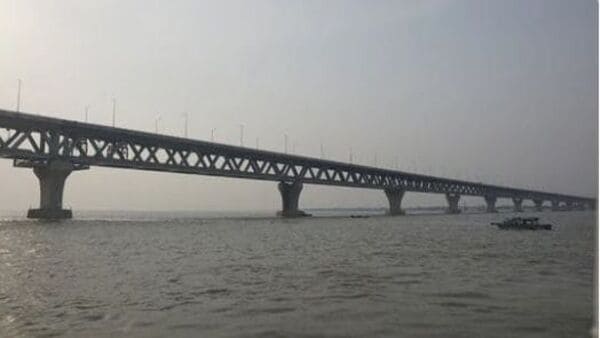 The Padma Bridge of Bangladesh has been ranked 122nd longest in the world.

Bangladesh Prime Minister Sheikh Hasina inaugurated the new multipurpose Padma Bridge on Saturday. This landmark bridge is the longest bridge in the country and it is reported to reduce the travel time significantly between the capital city of Dhaka to the Mongla seaport, which is an important location for regional and international trade. The bridge now connects 21 districts of Bangladesh's Southwest region with Dhaka and the rest of the country. It also promises to decrease travel time from Kolkata to Dhaka.

This Padma Bridge's main bridge is 6.15 kilometres long, while the railway viaduct is 0.532 kilometres long. According to an ANI report, this newly constructed bridge stretches to a total distance of 10.642 km including 41 spans that have been attached to 42 pillars. Each pillar has a distance of 150 m between them with a pilling that goes as deep as 128 m. This is also being claimed as the deepest pilling in the world and interestingly, the Padma Bridge of Bangladesh has been ranked 122nd longest in the world.

The Bangladesh government stated in the report that the completion of the Padma Bridge is a dream come true for 170 million people in the country. “With the construction of the Padma bridge, the Bangladesh government has set an example for other countries in South Asia by constructing the bridge with its own money which will no doubt encourage other countries to come forward in order to develop good regional connectivity by taking on more projects like this," was quoted by a Bangladesh PMO official in the report.

India’s High Commissioner to Bangladesh Vikram Kumar Doraiswami praised this infrastructural development calling this bridge a connector of people and culture and not just a route to business. “I think it will have an important benefit on poverty alleviation programmes, on economic activity," added Doraiswami.

The construction of Padma Bridge began in 2015 and the last span of construction was completed in December of last year.