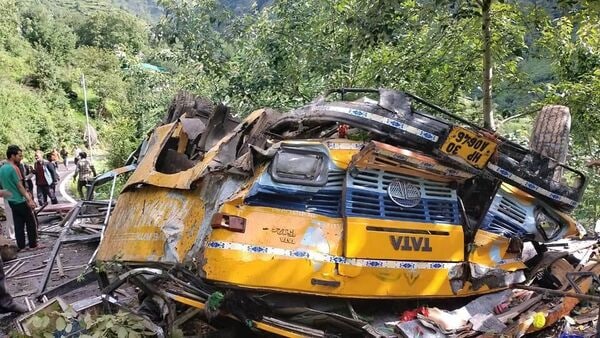 More than 2,600 people lost their lives in over 3,000 ‘roll-down’ accidents in Himachal Pradesh in the past five years, the state police said in a statement. The police statement comes a day after a bus fell into a gorge in Sainj valley of Kullu, causing death of 13 people and injuries to two. Such crashes have been attributed to lack of crash barriers along the roads on such hilly areas.

The as many as 3,020 "roll down" accidents in the state caused death of a total of 2,633 people in five years while caused injuries to 6,792, a press release issued by Director General of Police (DGP) Sanjay Kundu said. It noted that while the total road length in the state is 38,035 km, crash barriers have been installed at only 520 km of the road length.

The press statement revealed that most number of such roll-down accidents took place in Shimla, making up 32% of the total accident figure at 973. This was followed by 425 accidents or 14 per cent in Mandi and 306 mishaps or 10 per cent in Chamba and Sirmaur each. The data also revealed that 1,679 accidents or 56 per cent of total mishaps occurred on the link roads followed by 1,185 or 39 per cent on national and state highways.

Around 42 per cent or 1,264 cases were attributed to overspeeding while dangerous driving became the primary cause in 641 or 21 per cent of accidents. Turning without care was the reason in 609 or 20 per cent of mishaps. All these make up the leading causes of accidents.

In 51 per cent accidents or 1,530, cars were involved, this was followed by pickup vehicles in 592 mishaps and buses in 79 of them. The official statement informed that a list of black spots/clusters/stretches have been shared with the HPPWD authorities to install crash barriers. Another list of 10 vulnerable stretches in each district have also been shared. These require immediate cate.