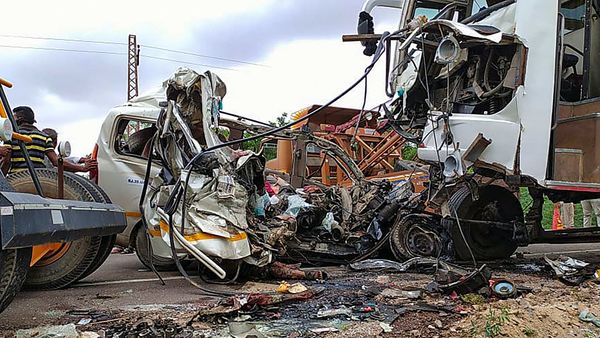 Mangled remains of a car after a collision with a bus on the Jodhpur-Barmer highway near Jodhpur. (File photo)

Union minister Nitin Gadkari on Tuesday said there is a need for a policy on public private partnership (PPP) model for an intelligent traffic system to reduce road accidents.

A reputed private consultant will be appointed to come out with the model, the Road Transport, Highways and MSME Minister said while asserting that post implementation of the Motor Vehicles (Amendment) Act, 2019, road accidents and related deaths have come down.

India, on an average, witnesses about 5 lakh road accidents per annum in which about 1.5 lakh people die and about 3 lakh are crippled.

"This is the time we should go for PPP (public private partnership) model in transportation...We will appoint a private consultant, a good reputed company to study how we can make PPP model in transport system particularly in Intelligent Transport System (ITS) at state level, municipal corporation level and the National Highways level,"the minister said while addressing a webinar on road safety organised by non-profit body Consumer Voice.

He said a tender will be released soon in this regard.

The minister also expressed confidence that road accidents and related 1.5 lakh deaths per annum would be reduced by 50 per cent by 2025 against the target of 2030.

"We are working on fast track mode to achieve the goal with the cooperation of all stakeholders especially the state governments," he said.

The minister said he has taken lot of initiatives to reduce road accidents including correcting black spots or spots witnessing a high number of accidents due to bad road designing or other road engineering or related flaws.

He added that the World Bank and the ADB are providing ₹7,000 crore each for removing black spots from national highways.

He lauded the Tamil Nadu government's efforts to brought down road fatalities by 25 per cent by implementing a project with the World Bank's assistance.

Gadkari also called upon Members of Parliament who are chairing District Road Committees to identify black spots and pursue their redressal.

He highlighted that black spots need to be identified on state and municipal roads where the cooperation of public, state governments, MLAs, MPs etc is of paramount importance. The minister also called for public movement by social awareness and education, improving emergency services, pressing for medical facilities etc in the country besides seeking cooperation of the automobile industry in marching closer to achieving its road safety targets. He referred to the Motor Vehicles Act of 2019, which is a comprehensive legislation on all aspects of transport sector in India.

Talking about the stress caused by the Covid-19 pandemic, he said: "Due to Covid-19 we are in a very stressed position, economically. State governments and central government are facing financial constraints" and added that with concerted and joint efforts India will overcome the crisis.

He said road accidents and related deaths have reduced post amendment to the MV Act and during Covid-19 and urged all states to ensure implementation of the Act in right spirit.