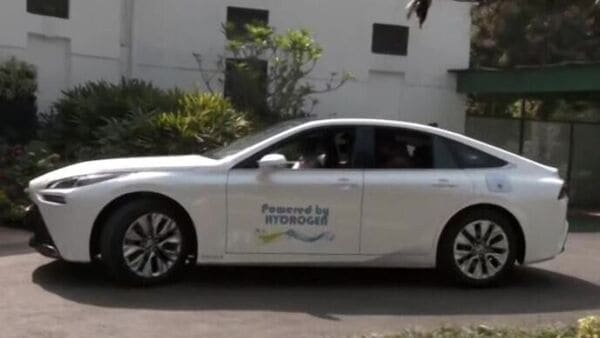 Union Minister Nitin Gadkari on Wednesday arrived in Parliament in a Toyota Mirai which is India's first all-hydrogen electric vehicle that began a pilot study here earlier this month. The Mirai from Toyota runs on electricity generated entirely by hydrogen and the vehicle is currently being tested as part of a pilot project to push for cleaner and greener sources of energy for mobility solution in the country.

The Toyota Mirai was launched in India by Gadkari earlier this month and on the occasion, he had underlined the need for vehicles running on sustainable fuel sources. "To become Atmanirbhar, we've introduced green hydrogen which is generated from water. This car is a pilot project. Now, manufacturing of green hydrogen will begin in country, imports will be curbed and new employment opportunities will be created," he had said.

Toyota Kirloskar Motor had also informed that the Mirai would be manufactured at its facility in Karnataka and that it could be a viable option in the times to come. The Indian government is backing battery-powered electric vehicles but has also indicated a hydrogen fuel cell as an alternative fuel solution against petrol and diesel.

Gadkari arriving in Parliament in a Toyota Mirai comes also at a time when fuel prices have been hiked eight times in nine successive days. The government has blamed the volatile oil price situation in the international market, pointing a finger to the Russia-Ukraine conflict. But in the long term, many experts agree that the dependence on petrol and diesel would have to be brought down significantly, especially in a country like India which imports around 80% of its requirements from overseas markets.