Nissan took the wraps off its revamped intelligent factory in Tochigi on Friday.Nissan first announced in 2019 it would begin installing advanced technologies and equipment at its Tochigi plant.
By : Bloomberg
| Updated on: 09 Oct 2021, 04:10 PM 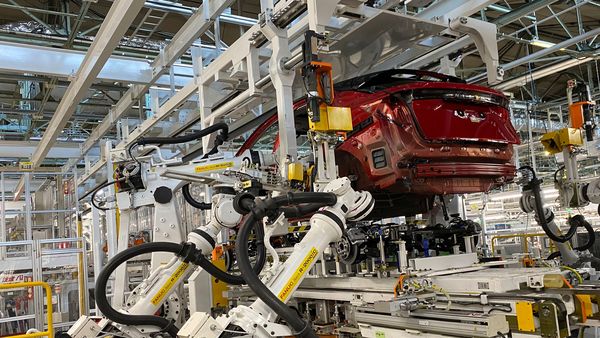 As part of its “Intelligent Factory Initiative," Nissan has spent about 33 billion yen over the past two years installing advanced equipment at its Tochigi plant north of Tokyo. The company now plans to bring the same initiative to major plants in Japan and the U.S., Nissan Executive Vice President Hideyuki Sakamoto said in an interview Friday.

The plants Nissan is looking to furnish with new investment include its Oppama and Kyushu factories in Japan and its Canton and Smyrna plants in the U.S. Investment in those latter two plants will top 70 billion yen while each Japan plant will receive around the same amount injected in the Tochigi site, Sakamoto estimated, adding that new equipment will be introduced at the sites gradually over a period of around seven years.

Nissan took the wraps off its revamped intelligent factory in Tochigi on Friday. Technologies introduced at the site include production facilities for EVs, efficiency-boosting VR training systems and new automated parts of its production lines. Nissan will also electrify plant equipment and source electricity from renewables and fuel cells as part of its plan to cut factory carbon dioxide emissions by 41% in 2030 versus 2019 levels, Sakamoto said.

Nissan first announced in 2019 it would begin installing advanced technologies and equipment at its Tochigi plant. The 2.9 million square meter (717 acre) site produces around 250,000 vehicles annually including several Infiniti brand models. The Nissan Tochigi plant and its technologies are designed to serve as a model for global plants.

Nissan is scheduled to start production of its flagship Ariya electric vehicle at Tochigi this fiscal year. The crossover EV is one of 12 new models Nissan plans to bring to market as part of its Nissan Next turnaround plan. Analysts have highlighted the model as key to the automaker’s future performance. Nissan touts the car as embodying its decades of experience producing electric models.

Because the Tochigi plant will be producing electric cars, there are several ways lines have had to be modified to churn out both battery and gasoline-powered models. This is noticeable in the section of the production line that mounts powertrains — the assembly of every component that pushes a vehicle forward. Automated pallets are programmed to install electric and conventional car-oriented powertrains. The system measures the car’s dimensions and makes micro-adjustments to ensure the assemblies are installed to within a fraction of a millimeter’s accuracy.

There are also machines installed to produce parts specifically for the Ariya. For the first time ever in mass-produced cars, according to Nissan, the Ariya will replace magnets commonly used in rotors with tightly-wound copper wire. That improves the efficiency of the motor component when traveling at high speeds and means expensive and supply-risky rare earth metals can be reduced.

To boost efficiency at the Tochigi plant, mixed-reality headsets are being used to train workers to perform processes such as checking complex auto parts for scratches or deformations. When using the headset to look at machinery, instructions appear suspended in the air and arrows point to areas of the part that need to be checked. Workers can also pace around and inspect a simulation of a car.

In another attempt to increase efficiency, Nissan has installed human monitors in a control room on the second floor of a building on the site. They monitor 27 screens for any issues occurring on production lines. Sensors scattered throughout the factory floors warn of any problems, and workers using a camera headset and tablet are dispatched to the site and given instructions by the monitors on how to fix an issue if it occurs. Nissan estimates this system reduces equipment recovery time by 30%.