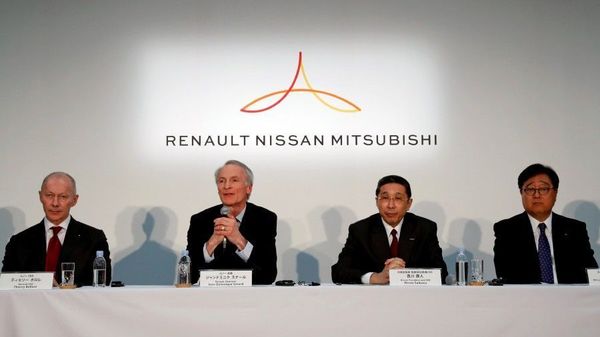 The alliance between Nissan Motor Co., Renault SA and Mitsubishi Motors Corp. agreed to coordinate strategies and name leaders for regions and technologies in a move clearly designed to reverse managerial paralysis and a rapid deterioration in profitability over the past year.

The companies’ mid-term plans will be disclosed around May, they said in a statement Thursday following a meeting in Japan, adding that the alliance is “essential" for growth. Nissan will be the so-called reference for China, Renault for Europe and Mitsubishi for Southeast Asia, while one company will lead development for each key technology, they said.

“We are not performing as expected" in the alliance, Nissan Chief Executive Officer Makoto Uchida told reporters after the meeting. The admission of shortcomings coincides with an industry slump and jitters about the impact of a viral epidemic in China.

The Franco-Japanese partnership, which came close to collapse last year following the arrest of former leader Carlos Ghosn, also had to digest some sobering news Thursday when confirmation came that their sharp drop in combined unit sales last year had pushed them behind industry leader Volkswagen AG and No. 2-ranked Toyota Motor Corp. The meeting of their senior leadership was the first since Ghosn’s dramatic escape last month from Japan, where he faced charges for alleged financial crimes during his tenure, and Renault named a new CEO.

“We all share the sense of urgency," Jean-Dominique Senard, Renault’s chairman, told reporters, adding that the meeting took a close look at what was going well and what can be improved in the partnership.

Senard has made patching up differences within the alliance a priority, and has said new governance and management at Nissan have improved their working relationship. The ouster of Ghosn, the former chairman of all three automakers, revealed long-simmering tension stoked by Renault and Nissan’s lopsided cross-shareholdings.

Yet Nissan has shown few signs of willingness to move on, vowing to pursue legal action against its former boss who kept the partnership together. As the largest and most profitable member of the alliance, Nissan risks distracting from efforts to revitalize its troubled operation should its management spend their energy settling scores with its former leader.

“Nissan already has a lot of problems with its core business and the focus on Ghosn is a big distraction for management," said Christopher Richter, CLSA’s deputy head of Japan research.

Turning around sales in the U.S. and Japan is all the more urgent due to the spread of a deadly virus in China that may further depress already weak demand in the world’s largest car market, which accounted for 28% of Nissan’s global sales last year. The outbreak originated in Hubei province, one of China’s major auto hubs and home to assembly plants operated by Nissan, Honda Motor Co., Peugeot-maker PSA Group and General Motors Co.

“Nissan has large exposure to China," said Tatsuo Yoshida, a Bloomberg Intelligence analyst. “China is a major source of profits, while Nissan’s businesses in other parts of the world are barely making money."

In its home country of Japan, Nissan dealers say the Ghosn scandal has tarnished the company’s image and hurt sales. A steady drip of Ghosn-related news, as well as the recent departure of one of the company’s chief operating officers, have dominated headlines over the past month.

On Thursday, prosecutors issued another arrest warrant for Ghosn, saying that he left the country illegally when he snuck aboard a private jet in Kansai International Airport and flew to Lebanon.

The Tokyo Job: Inside Carlos Ghosn’s Escape to Beirut

American dealers want the company to close the chapter on the Ghosn era and concentrate on rebuilding the once highly profitable but now sagging U.S. business.

“You wonder what the hell is going on, but it doesn’t affect our relationship with customers. I haven’t had one customer come in and mention Ghosn. That’s old history," said Rhett Ricart, owner of a Columbus, Ohio-based auto dealer group with a Nissan franchise.

Nissan’s Uchida received an ear full in a 90-minute meeting in Nashville earlier this month, where U.S. dealers sounded off about the company’s ill-fated attempt to grab market share with aggressive incentive spending and Nissan’s aging product line.

“The dealers said what they had to say and it got rough at times, but it was respectful," Geri Lynn, owner of a Nissan dealership near New Orleans, said she heard from two people with first-hand knowledge of the meeting.

Azusa Momose, a spokeswoman for Yokohama-based Nissan, declined to comment.

“One of the things dealers have not been happy about is that the product has gotten a bit stale," Lynn said, adding that is expected to change this year with several model changes.

The long-awaited series of new vehicle launches aims to reinvigorate one of the industry’s oldest product line-ups, including a restyled version of Nissan’s best-selling Rogue compact SUV.

A manager of a dealership in central Tokyo, who asked not to be identified, said his franchise has been forced to rely on steep discounts and sales of add-on options to make ends meet amid a drought of new product. The Ghosn affair has also hurt business by damaging the company’s image, he said.

The power vacuum resulting from a series of management shake-ups in the wake of Ghosn’s arrest in late 2018 has slowed decision-making and unnerved dealers in the U.S. and Japan. Uchida took over Nissan in October and Renault on Tuesday appointed former VW executive Luca de Meo as its next CEO, starting in July.