ProPilot, which includes features that hold a vehicle in a single lane and match its speed to surrounding traffic, is highlighted by industry experts as a technology that could prove pivotal for Nissan.
By : Bloomberg
| Updated on: 28 Jan 2021, 08:12 AM 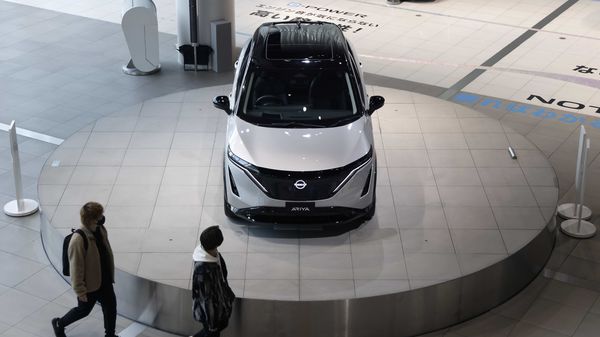 After two years of faltering sales and fallout from the 2018 arrest of ex-chairman Carlos Ghosn, Nissan Motor Co’s newly installed management are at another crossroads: how to get Japan’s second-largest automaker out of a rut and beyond the shadow of the disgraced executive who drove its strategy for decades.

Nissan is also facing unparalleled competition, especially in the realm of advanced autonomous driving. The automaker spends only about half of the 1 trillion yen that Toyota Motor Corp outlays annually on R&D and carmakers in general lag behind capital-rich tech firms like Alphabet Inc, which has spent more than $1 billion on self-driving technology via subsidiary Waymo LLC.

Nissan Senior Vice President Takao Asami is cognizant of the challenges, admitting that “if we lose out in terms of technology, we’re going to lose out in terms of business."“Lately there’s been a lot of discussion internally about what our DNA is, what areas we can dig deep into and win," Asami said in an interview. One idea surfacing within the company’s executive committee is that Nissan needs to go back to its roots, doubling down on R&D to revive a perception that existed before Ghosn’s turn of the century-arrival of Nissan as the country’s leading automaker when it comes to next-generation technologies.

That means reaching into shallow coffers to make sure Nissan remains ahead of the competition in the two technological changes sweeping the auto industry: electrification and autonomous driving.

By fiscal 2023, Nissan aims to sell 1 million pure electric and electric powertrain-fitted vehicles, and 1.5 million vehicles equipped with ProPilot, the company’s semi-autonomous driving system, annually. By comparison, Toyota is targeting 5.5 million electrified vehicles a year by 2025 and is equipping most of its new vehicles sold in major markets with autonomous features.

ProPilot, which includes features that hold a vehicle in a single lane and match its speed to surrounding traffic, is highlighted by industry experts as a technology that could prove pivotal for Nissan, with the potential to boost the automaker’s sales and brand image -- if it can keep ample funding flowing into its development.

Nissan “stands out" in how it has brought autonomous features to the mass market, said Deloitte Tohmatsu Consulting Partner Lei Zhou. The carmaker introduced ProPilot into a wide range of models early on, which has provided the scale to bring costs down, Zhou said.

Autonomous driving is typically defined on a five-step scale, ranging from zero, where cars issue automated warnings, to level 5, where they will be able to handle all roads and conditions without human intervention. Technologies commercially available in vehicles today -- including Nissan’s ProPilot -- max out at level 2, meaning an automated system can take control of certain functions, but drivers must continuously monitor and be prepared to jump in.

Tech giants in the US and China are more advanced when it comes to the computer science-heavy arena of advanced level 4 or level 5 autonomous driving.

Investing in lower-level technologies comes with its own set of challenges, too. Though easier to make profitable now, the technologies run the risk of quickly becoming standardised. “ProPilot’s features are considered advanced within level 2 systems today but in the blink of an eye, they’ll become common features instead of selling points," Bloomberg Intelligence analyst Tatsuo Yoshida said.

Nissan was one of Japan’s industrial pioneers, carving out its place alongside Toyota by building a reputation as an early adopter of new automotive technologies. It began exporting cars to the US in the late 1950s and found success with its Datsun 240Z sports car, whose “unbeatable combination of rakish lines, raw horsepower and affordability young Japanese and American guys found impossible to resist," Bloomberg Businessweek reported.

But there were some big missteps. In the late 1980s, Nissan rolled out a series of forgettable sedans that were more expensive than their rivals’. By 1999, Nissan was on the verge of bankruptcy and needed emergency loans from the government to stave off collapse.

Ghosn, dispatched by Renault SA to Tokyo after the French company bought a strategic stake, righted the ship, his slash-and-burn approach returning Nissan to profit ahead of projections. But under Ghosn, Nissan also expanded globally at break-neck speed, diving into markets such as India and China and steeply discounting vehicles to increase market share.

After Ghosn was arrested in late 2018 for alleged financial crimes, Nissan was left to deal with an increasingly strained alliance with Renault and Mitsubishi Motors Corp as well as the flight of a number of its most senior executives.

In May, Nissan unveiled a turnaround plan that involved taking a pronounced step away from the tenets pushed by its former chairman. Instead, the automaker would cut global capacity by double digits, wind down incentives and train resources on select markets.

Throughout it all, Nissan never completely lost its technology bent. Its 2010 Leaf was the world’s first mass-market electric car, only recently losing the crown of all-time best-selling EV to Tesla Inc’s Model 3. And in the US, Nissan has been neck and neck with Honda Motor Co over the past decade for the spot of top foreign automaker, after Toyota.

Today, that central technology focus represents a new chapter for Nissan, said Asami, who joined the company in 1981 after studying electrical engineering at the University of Tokyo.

Although the pandemic shaved around 15% off global auto sales last calendar year and Nissan is forecasting an operating loss of 340 billion yen for the fiscal year ending March, the company hasn’t decreased the amount of funding it’s allocating to technological development, Asami said. He says figuring out how to move efficiently forward is both crucial and the company’s “biggest headache."

For now, its strategy is to focus on spreading ProPilot widely across models rather than pushing full-force into higher-level autonomous technologies. It also plans to tap funds brought in by vehicles equipped with ProPilot today to build out tomorrow’s next-generation of features.

This is about “the future and creating a company based on core technologies," Asami said. “Even with limited resources we’re going to continue putting a hammer to the rock."