The milestone was achieved at Nissan’s plant in Sunderland, England, almost a decade after the LEAF model first went on sale.
By : HT Auto Desk
| Updated on: 10 Sep 2020, 02:35 PM 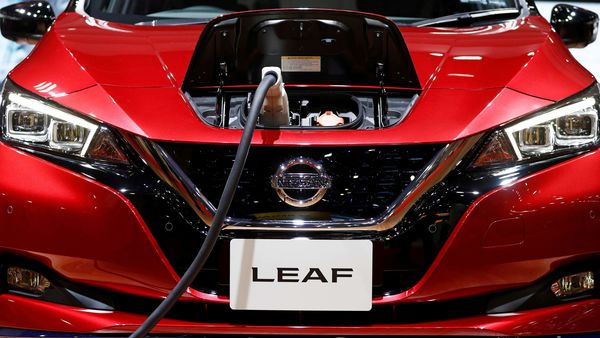 FILE PHOTO: A charging cable is attached to a Nissan Leaf electric car at the Tokyo Motor Show.

Nissan has marked the production of the 500,000th LEAF EV, the world’s first mass-market 100% electric car. Nissan says with half a million LEAFs built globally, customers around the world continue to embrace the pioneering zero-emission vehicle.

The milestone was achieved at Nissan’s plant in Sunderland, England, almost a decade after the model first went on sale. The 500,000th LEAF was handed over to its owner Maria Jansen, in Norway. “We’re very excited to become the proud owners of the 500,000th Nissan LEAF. This car really meets our needs with extended range and enhanced technologies," Jansen said.

The Nissan LEAF has won various accolades around the world including World Car of the Year 2011, Car of the Year 2011 in Europe, and Car of the Year Japan in 2011 and 2012. Among safety, control and comfort features, the electric car features ProPILOT – a “hands-on, eyes-on" system that allows the car to stop, restart and stay centered in its lane and e-Pedal technology for one-pedal driving.

Nissan says that the LEAF EV owners have driven more than 14.8 billion clean-air kilometers since 2010 and have collectively helped prevent more than 2.4 billion kilograms of CO2 emissions. "Now more than ever, consumers are looking to take positive steps towards a more sustainable future and the Nissan LEAF contributes to this effort," said Helen Perry, head of electric passenger cars and infrastructure at Nissan Europe.