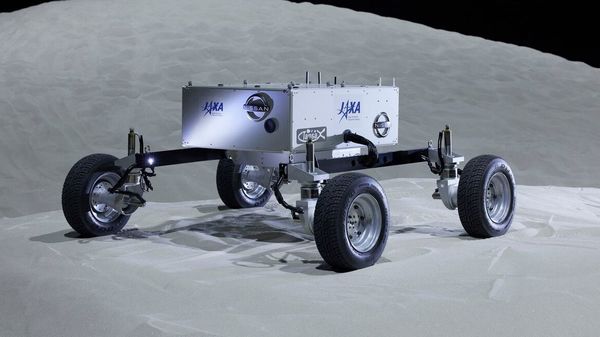 Nissan is in the fast lane of showcasing one concept vehicle after another but the latest from the Japanese car maker is out of the world, and literally at that. Nissan recently showcased its lunar rover prototype - developed in partnership with Japan Aerospace Exploration Agency (JAXA), as a research project. And it's quite a remarkable concept.

The Nissan lunar rover prototype borrows substantially from electric vehicle technology right here on Earth and makes use of an all-wheel control technology that has been previously displayed on the Ariya EV and motor control technology developed through its mass-market EV - Leaf. The aim is to showcase a concept that promises to negotiate the tough terrain on moon with ease. "The uses of automobiles and driving situations are wide-ranging. We aim for the ultimate driving performance through our research and development, and believe the know-how gained from this joint research with JAXA will lead to innovations in our vehicles that will bring benefits to customers," said Toshiyuki Nagajima, GM of Advanced Vehicle Engineering Department at Nissan.

At the core of the Nissan lunar rover concept then is the company's e-4ORCE technology that claims to enhance the controls of all four wheels of a vehicle independently. These, quite obviously, assume even more significance on the lunar surface with Nissan saying it understood the need for a rover to confidently manage the powdery, rocky and undulating terrain while still being energy efficient. “By conducting research with Nissan, which has expertise in electrified technologies, we hope to apply our findings to the development of higher-performance lunar rovers," said Ikkoh Funaki, Director at JAXA Space Exploration Innovation Hub Center.