Elon Musk is donating $100 million toward a prize for the best carbon capture technology.Musk, who heads Tesla Inc. and Space Exploration Technologies Corp., said he’ll unveil details of the prize next week.
By :
| Updated on: 23 Jan 2021, 03:36 PM 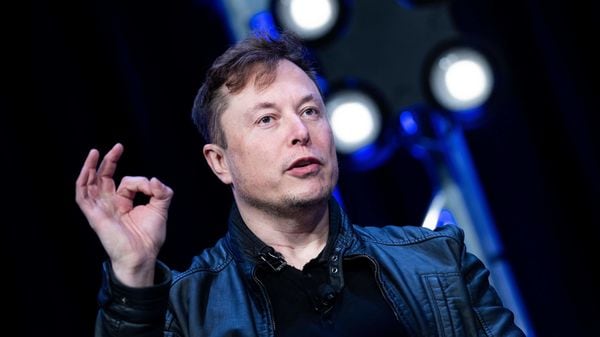 Musk said he will unveil details of the prize next week. File photo of Elon Musk.

Elon Musk, the world’s richest man, is donating $100 million toward a prize for the “best carbon capture technology."

Carbon capture is, in fact, a broad mix of technologies with the same aim: collecting carbon dioxide so it doesn’t escape into the atmosphere and contribute to global warming. The greenhouse gas can be captured from power plants and factories, or even directly from the air.

Musk, who heads Tesla Inc. and Space Exploration Technologies Corp., said he’ll unveil details of the prize next week. But his past statements suggest that one of his key goals is to lower the price of direct-air carbon capture so it can feasibly be used to make synthetic rocket fuel, replacing the fossil fuels used now.

In 2017, he said: “There isn’t some way to make an electric rocket. I wish there was. But in the long-term, you can use solar power to extract CO₂ from the atmosphere, combine it with water, and produce fuel and oxygen for the rocket." He brought up the idea again in 2019, when he responded to a question on Twitter about using carbon capture to make rocket fuel, saying “rocket flights will be zero net carbon long-term."

What Musk is describing is not science fiction. There are at least three startups — Canada’s Carbon Engineering, Switzerland’s Climeworks, and the U.S.’s Global Thermostat — that have each built working pilot plants to capture carbon dioxide from the air. Carbon Engineering has even made a small batch of synthetic fuel from CO₂.

The science itself isn’t new. Researchers have been using chemical reactions to convert CO₂ into hydrocarbon fuels for about a century. The difficulty has been lowering the cost of the process and figuring out how to power it with clean energy. Because CO₂ is the end-product of burning fossil fuels, reversing the process requires a huge input of energy.

And while capturing carbon from facilities where burning fossil fuels is not trivial, trying to suck it from the air where concentrations of the gas are very low requires filtering large amounts of the gas for a tiny volume of CO₂. The three companies with pilot plants spent tens of millions of dollars to get to this stage, and there’s a long way to go. The cost of securing one ton of carbon using direct air capture can be as high as $600 — about 15 times the price of carbon traded in Europe’s market.

There are two ways to bring down the cost. The first is to work out the problem of scaling up in real time — build large plants at the cost of hundreds of millions of dollars, giving engineers the opportunity to optimize the process through trial and error. Carbon Engineering is currently working with Occidental Petroleum Corp. to build a plant that can capture 1 million tons of carbon dioxide each year.

The second, possibly more cost effective, route is to increase the pace of innovation. Governments can boost funding for research and development. Or billionaires can launch attention-grabbing competitions. With a prize, “you’re inducing activity where there is an opportunity," said Tris Dyson, managing director of Nesta Challenges, a nonprofit focused on innovation in the U.K.

It’s a strategy that’s been around for centuries, and it’s worked in the past. The Longitude Rewards were a series of prizes launched by the U.K. government in 1714 to help develop practical methods for determining the precise longitude of a ship at sea. The reward tugged at the entrepreneurial spirit of innovators, and participants often ended up spending more money in total developing the technology than the prize sum itself.

In a way, the exercise taps into irrational behaviors to drive a favorable outcome, said Dyson. “It’s the nature of entrepreneurs and innovators," he said. “They are highly optimistic creatures."

Musk’s $100 million is likely to lead to many times that amount being invested into developing carbon capture technology. That’s something the space desperately needs. Climate models show that some form of negative-emissions technology will be required to meet the goals of the Paris Agreement, and there’s a limit to how many forests can be planted to naturally absorb CO₂.

“Air is practically an infinite reservoir of CO₂," said Stuart Haszeldine, professor of carbon capture and storage at the University of Edinburgh. If there’s a carbon capture technology that deserves such a prize, Haszeldine reckons that direct air capture is the right target.

Musk isn’t the first billionaire to propose a multimillion-dollar carbon capture prize. Richard Branson launched the Virgin Earth Challenge in 2007, offering $25 million for commercially viable machines that can remove significant amounts of CO₂ from the air for at least 10 years. In 2011, finalists were announced but none met the criteria. The Carbon XPrize, started in 2015, currently has 10 finalists vying to convert CO₂ into products. The winner is expected to be announced in 2021.

These past technology prizes can help Musk design his own. His team has to put in considerable effort to map out the technology landscape and future pathways for its use before it launches the competition, said Nesta Challenges’ Dyson. That will help create clear criteria that’s ambitious but not impossible. The rules have to stay consistent, and small financial rewards for reaching smaller milestones can help teams stay motivated.

Dyson, who has been working on the criteria for a direct air capture award, says he would love to work with Musk on his prize— mostly because of his star power.

“People will want to have a go at the prize just to be associated with Elon Musk," said Dyson. Carbon capture, until now confined mostly to the realm of climate science wonks, could do with that kind of mainstream publicity.