The jibe came within days after reports that Elon Musk is looking to hire people to defend him on the social media platform.
By : HT Auto Desk
| Updated on: 22 Jan 2021, 09:51 AM 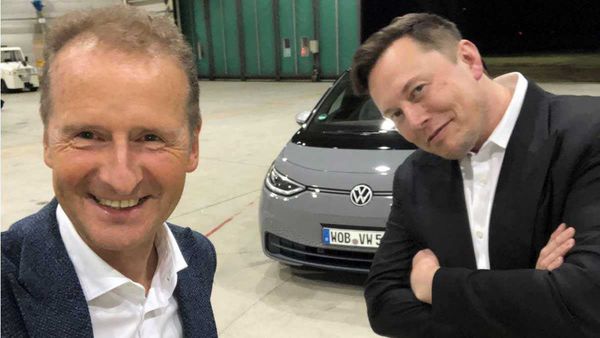 He had no Twitter account. He opened it and, to premiere it, he was launched at the ready against the founder of Tesla, Elon Musk. It's Volkswagen CEO Herbert Diess, who's new to Twitter, and as soon as he got into social media, he threw darts at the Tesla owner.

In his first tweet, Diess said: "I am here to make an impact with @VWGroup, especially on political issues."

With what he added, he seemed to show that he entered the age of social media to verbally compete with the founder of Tesla. "We look forward to productive discussions," he said, referring directly to Elon Musk. The CEO of Volkswagen puffed out when he said that "the Volkswagen Group (VLKAF), which includes VW and Audi among other brands, has given a great boost to electric vehicles, selling more of them than any other traditional car manufacturer."

According to his accounts, last year he sold 231,600 pure electric vehicles, a little less than half of the 500,000 cars sold by Tesla, but more than three times the production of Volkswagen electric vehicles in 2019. He mentioned that Tesla is building a factory in Germany to increase its sales in Europe.

Hello @Twitter! I’m here to make an impact with @VWGroup, especially on political issues. And, of course, to get some of your market shares, @elonmusk – after all, our ID.3 and e-tron have won the first markets in Europe. Looking forward to productive discussions!

Diess joined Twitter in December but sent out his first tweet on Wednesday. Two days ago, it was reported that Tesla has begun hiring process to find someone who can defend its CEO Elon Musk on Twitter. Musk, very active on Twitter, is known to respond to customer complaints on Twitter and collect feedback about the company's products.

When it comes to electric vehicles (EVs), Tesla has quite a commanding lead over its rivals. And this includes Volkswagen which has been a Goliath in the automobile industry for decades. As car makers step on the pedal in a bid to close this gap against Tesla, Volkswagen's ID.3 has shown quite a lot of potential but the California-based company may already be getting ready to hit back.

A media report suggests that Tesla could be working on developing a Model 3-based hatchback that could help it tame any challenge that the VW ID.3 could potentially throw at it. The Model 3 is, by far, the most popular EV sedan and is also the most affordable from Tesla and a hatchback version based on it could once again rile up the market.

The same report also suggests that the new EV may be developed at Tesla's new plant in Germany and may be primarily aimed at the European markets which are currently seeing a boom in the EV space due to incentives announced by several governments.

Last year, Musk met Diess and had a test-drive of the Volkswagen ID.3 electric-car, according to people familiar with the matter. Musk also inspected the ID.4 electric SUV that VW will launch toward the end of the year, said the people, who asked not to be identified as the meeting wasn’t public.