Mercedes EQS and EQA are being extensively tested before their launch schedules in international markets.Mercedes is determined to launch its EVs and have a larger share in the EV market around the globe.
By : HT Auto Desk
| Updated on: 16 Nov 2020, 09:21 AM 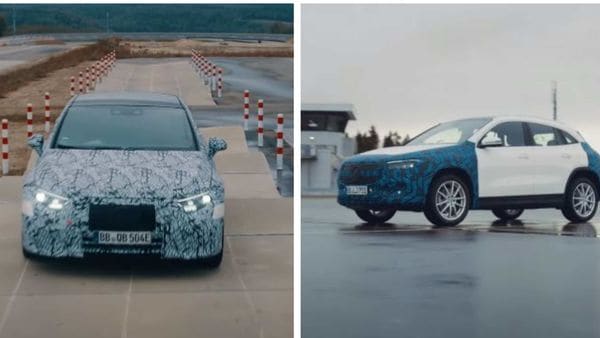 Mercedes EQS (left) and EQA at a testing track in Germany.

Continuing with its mission towards sustainable mobility, Mercedes-Benz has been forging its path forward in the world of electric vehicles and after launching the EQC e-SUV in several markets including India, has now given a glimpse at its EQA and EQS models. The two cars, under heavy camouflage, have been going through extensive tests at the company's testing and training center in Germany's Immendingen.

In the test video released by Mercedes, the EQA is showcased first as it takes the wade test to prove its abilities to handle water and still keep its electrical circuits protected. It is then taken through high-speed sections and through sharp turns to give a glimpse at its performance capabilities as well as its drive dynamics.

The same tests are also conducted on the EQS. It is the EQS that is perhaps the most awaited in several markets, especially in the US where the German auto company is looking at going top-down with its range of EVs. The EQC has not yet been launched here and that is another sign that it is the EQS that could truly start it all in this particular market.

The reason for the EQS to be gaining quite a lot of attention is because the S-Class is indeed the flagship when it comes to luxury and has often been known for the opulence it offers. EVs are also about sustainability and it would be interesting to see how the premium sedan marries both elements.

Will the EQS and EQA then find their way to India too? It may currently be a little too early to predict but Mercedes has shown its intent of bringing its EV range to India. At the launch of EQC here, company officials told HT Auto that this was just the start and that the Indian customer deserves world-class EVs and that there is a market for such vehicles. At ₹1 crore (ex showroom), the EQC is an expensive offering, even by Mercedes standards. But it does promise the performance and economic drive while holding on to the luxury quotient for the driver and passengers.