Mercedes-AMG which is set to reveal the next-generation Mercedes-AMG SL model stated that the car will be suitable for everyday use.Mercedes-AMG SL will come with an all-wheel drive.
By : HT Auto Desk
| Updated on: 22 Oct 2021, 03:35 PM 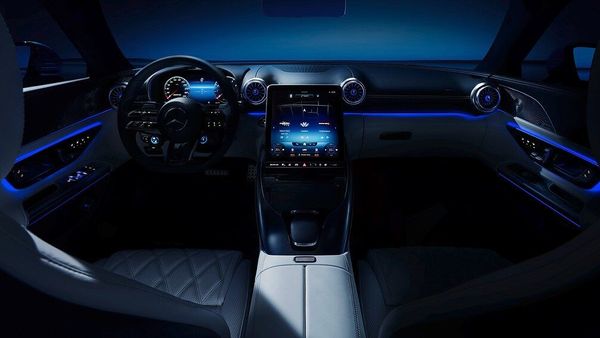 The interior of the upcoming Mercedes-AMG SL model

Mercedes-AMG has revealed the interior of its upcoming Mercedes-AMG SL ahead of its digital world premiere on October 28. The luxury automaker especially highlighted the new model's soft top, progressive character and its two-plus-two which, says Mercedes, makes the roadster suitable for everyday use.

The new Mercedes-AMG SL's interior will boast tilting infotainment screens that will help the driver to reduce the sun's glare on it if the roof is down. The dash has a symmetrical look with air vents poking outwards. The user will also get a digital screen as the instrument cluster. The automaker has not revealed any other details about the car's technical specs. Chief executive officer Mercedes-AMG GmbH Philipp Schiemer and chief design officer Daimler AG Gorden Wagener will present the highlights of the next-generation SL model.

Mercedes-Benz, while steadily converting its lineup into electric, also has plans to bring in an all-electric Mercedes-AMG Roadster. In an interview, chief operating officer Markus Schäfer had stated that an electrified roadster, when developed, will be an emotional product that will be important for brand building. He also clarified that the creation of an electric AMG Roadster will not be done to break any sales records of the company.

Mercedes-AMG, a few months ago, unveiled the GT 63 S E Performance which the automaker claimed to be the most powerful car ever. It is the first sport plug-in hybrid model that under the hood boasts a 4.0-litre bi-turbo V8 engine. It is capable to create a power output of 630 bhp and 900 Nm of peak torque whereas the electric motor can generate a power output of 201 bhp and a peak torque of 320 Nm.