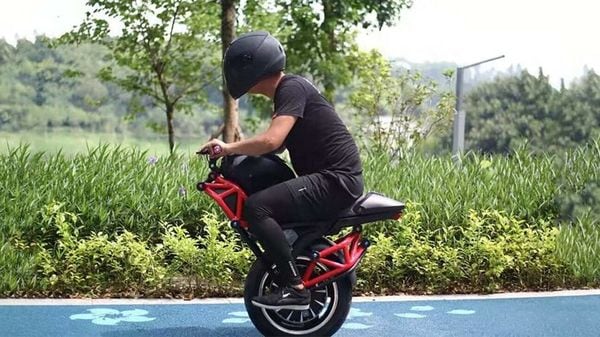 Alibaba's one-wheeled EV has a maximum full-charge range of 60-100 km.

If regular two-wheeled bikes or scooters aren't really your cup of tea, then the Chinese e-commerce group Alibaba has introduced quite a strange-looking one-wheeled electric bike that might tingle your senses. Alibaba already has its hands deep in the electric vehicle market and has also recently announced a partnership with SAIC to unveil a new electric car with wireless charging (more details here).

As the image (above) suggests, the one-wheeled electric bike sports a conventional Steel Trellis frame as well as a faux fuel tank. There is a certain Ducati Monster-like appeal from the tank design and the red dipped trellis frame which also makes the bike look fairly muscular from certain angles. There is also a rear pillion seat for the second occupant, but the functionality of the seat has a big question mark.

The electric motor on this single-wheeled EV delivers 2,000 watts of power and is capable of propelling the bike to a top speed of 48 kmph. Goes without saying, the absence of the second wheel isn't very reassuring in terms of stability on fast lanes, but the fact that it only weighs 88 lb (40 kg) makes it one of the lightest modes of transport, second to a bicycle. The Panasonic battery pack inside the EV has enough capacity for 60-100 km of range on a full charge. The full charge time officially listed is as 3-12 hours.

Pitch your face towards the pavement to go, and then lean back to slow down. Here's a video demonstration (below) to show how it exactly functions: