Toyota Rumion MPV gets a 1.5-litre four-cylinder petrol engine that also does duty on Maruti Ertiga too.The engine comes mated to a five-speed manual or a four-speed automatic transmission.
By : HT Auto Desk
| Updated on: 25 Oct 2021, 11:45 AM 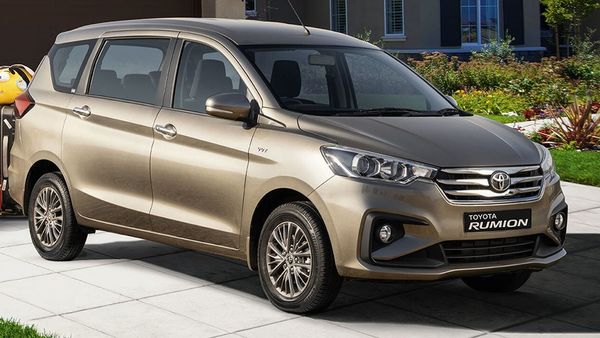 Toyota Motor has filed a trademark for the Maruti Suzuki Ertiga-based Toyota Rumion in India, hinting that the automaker is looking at launching the MPV in the country sometime soon, and under the same name. The vehicle, which is the third rebadged Maruti Suzuki model to be sold under Toyota brand, had been recently revealed in South Africa.

Though the automaker has not officially confirmed launch plans of Rumion in India, the filing of the trademark is a point to this direction. Notably, the Rumion MPV that is on sale in South Africa is manufactured in India, as part of the agreement between Toyota and Maruti to supply India-made Suzuki models to South Africa.

Toyota Rumion looks similar to Maruti Ertiga MPV that is sold in the Indian market. It features a front grille that extends across its angular halogen headlights and front fog lamp. It gets slanted A-pillars that continue into its tall roofline to accentuate its identity of a spacious vehicle.

There are no mechanical changes as well on the Rumion which gets a 1.5-litre four-cylinder petrol engine that also does duty on Ertiga too. The engine produces a maximum power of 77 kW @ 6,000 rpm and peak torque of 138 Nm @ 4,400 rpm. The engine is paired with a five-speed manual or a four-speed automatic transmission.

Apart from the Toyota Rumion that is expected to hit the Indian market soon, Toyota sells two other rebadged versions of Maruti Suzuki models in the Indian market. These include Glanza and Urban Cruiser, based on Maruti Baleno and Maruti Vitara Brezza respectively.

Further, Toyota is also expected to launch Belta, which will be a re-badged version of Maruti Ciaz in the country. This will come as a replacement of the discontinued Toyota Yaris sedan.