Maruti's plant in Manesar has commenced operations on a single shift basis with up to 75 per cent employees allowed currently.
By :
| Updated on: 12 May 2020, 12:42 PM 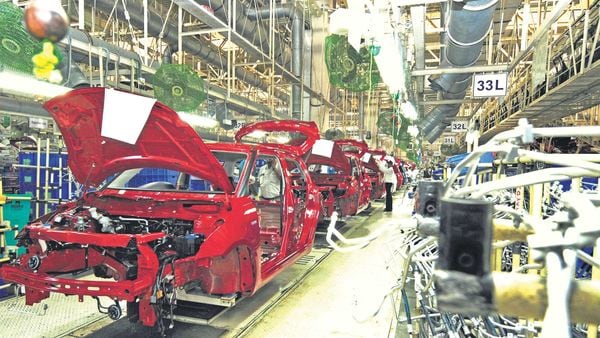 Maruti plans a one-hour gap between shifts to allow for disinfecting common spaces.

The country's largest carmaker Maruti Suzuki India (MSI) on Tuesday said it has resumed operations at its Manesar plant in Haryana after around 40 days of closure due to the coronavirus-led lockdown.

Operations at both Manesar and Gurugram facilities were suspended since March 22.

The facility has commenced operations on a single shift basis with up to 75 per cent employees allowed currently, he added.

(Also read: Hyundai rolls out 200 cars on Day 1 of production amid lockdown)

When asked about the timeline of full-swing operations, Bhargava said that would depend on government regulations like when two shifts would be allowed, when manpower could be increased and when supply chain would become fitter. “There are many variables involved."

On restarting manufacturing activities at Gurugram facility, he said "it will start, but not yet".

On April 22, the Haryana government had granted permission to the auto major to restart its Manesar manufacturing facility, but the company had said it will resume operations only when it can maintain continuous production and sell vehicles, "which is not possible at this point of time".

The Gurugram district administration had allowed the auto major to run the facility on a single shift basis, while fixing the total number of employees at the plant at 4,696.

MSI's Manesar plant is outside the limits of Gurugram Municipal Corporation, while its Gurugram plant falls within the city limits.

The two plants in Haryana have an installed capacity to roll out 15.5 lakh units per annum.

When asked how the lockdown would impact industry sales this fiscal, Bhargava said that in current circumstances it was too early to forecast.

He, however, pointed that cars in the country were among most highly taxed in the world.

"I have always held that cars are too heavily taxed in India by both the central government as well by the as state governments... The result is that carmakers in India pay much higher taxes than in most other developed parts of world," he noted.