Maruti Suzuki, which has close to 50% market share in the domestic passenger vehicle segment, noted that there remained a close connection between the state of economy and demand for automobiles.
By : PTI
| Updated on: 27 Sep 2020, 06:06 PM Maruti Suzuki says long-term outlook in the segment will depend on the economic growth.

The country's largest carmaker Maruti Suzuki India (MSI) remains bullish on the long-term growth prospects of the domestic automobile industry despite challenges in the short-term, a senior company official has said.

The auto major, which has close to 50 per cent market share in the domestic passenger vehicle segment, noted that there remained a close connection between the state of economy and demand for automobiles.

"If you look at the demand (for automobiles) in the long term, then obviously it depends upon the basic fundamentals of the economy. We have done a study. In the last 25-30 years, the demand has been very closely co-related with the GDP and per capita income growth," MSI Executive Director (Sales and Marketing) Shashank Srivastava told PTI.

So, the long-term outlook in the segment will depend on the economic growth, he added.

"In the long term, we estimate that the market would continue to be very strong as economy in the long run will be positive. We all are bullish about the growth. But in the short term, we are finding it difficult to predict," Srivastava noted.

When asked by when the company would reach pre-Covid-19 level in terms of sales and production, Srivastava said there is still a long way to go to reach normal figures.

July sales were similar to same month last year, while August sales were almost 20 per cent better than corresponding month of last year in terms of offtakes, he said.

"But we do not want to read too much into this data. It is true that month on month there has been progress but the thing is that last year the base was very low," he added.

Srivastava further said: "We are way away from the normal volumes even though when compared with last August or last July the people have been saying that sales have been better. There is no doubt that there has been a bounce back and this has positively surprised us. However, we must remember we are way off from our normal volumes." Comparison with last year figures would be misleading, he said adding that recovery is there but the company would not like to compare it.

Srivastava said it was getting difficult to predict when the company would be able ro achieve normal volumes.

"It is difficult to predict because there is this Covid sentiment which is coming in our way. Car buying in economic terms is a discretionary purchase because it is a high value item. For such kind of buys, the sentiment has to be positive," he noted.

This time there is a question mark in terms of sentiment because there is pandemic and it is affecting negatively, he added.

"So we don't know, there can be a vaccine led upside or an infection related downside. If there is second wave, (there might be) lockdowns, we don't know. So it has become very difficult to predict what will be the final sentiment. Will it be positive or negative, so difficult to say when we will get back to the normal," Srivastava said.

He, however, added that the company is ramping up production this month in order to enhance stock at retail level to take care of festive demand, if any.

Srivastava noted that acquisition cost remained one of the most important factors while buying a vehicle. 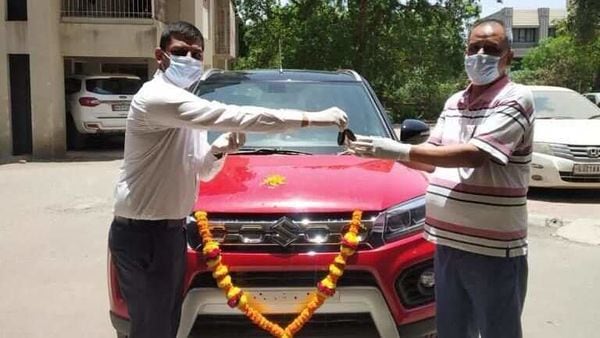 "India is an emerging market. Our income levels are quite low if we compare with some of the developed countries. Because of this lower income levels, our customers are very very cost conscious which means the cost of acquisition is very important to expand the market," Srivastava noted.

He was responding to a query if lowering of taxes (GST and state road taxes) would help in expanding the industry volumes.

Srivastava said he cannot comment on the government role and would only speak about the steps the company was taking on pricing and other fronts.

"We try to focus on things which are in our control to bring the cost down. So we try to reduce our component and overhead costs, improve productivity etc to bring down the cost for our customers," he said.

When asked if the company was looking at new models in the SUV space which has been witnessing robust growth and seen various companies coming up with new products, Srivastava said the company is trying to push volumes in the segment through Vitara Brezze and S-Cross.

"For new products, we keep studying all segments. We created and grew various segments with products like Ertiga, Swift and Baleno. We keep on studying the market, it is a continuous effort," he noted.

On price hike, Srivastava noted that the auto major was yet to decide on the matter.

"There is pressure in terms of profitability, input costs, currency movement but at the same time, we also have to see that on the market side volumes have come down. We need to find balance between the two, so we are keeping a close watch on the situation as of now," he added.