The US auto industry, despite recent record profits, has seen its employee numbers dive over the past few decades.
By : AFP
| Updated on: 11 Mar 2020, 12:17 PM 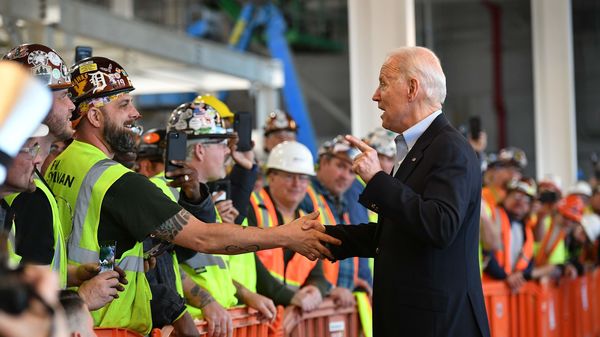 Eric Truss has worked in Michigan's famed automotive plants for 24 years, and watched as many of his coworkers helped flip the state Republican four years ago. On Tuesday he voted for Joe Biden, who has his sights set on ousting Donald Trump.

Support from people like Truss -- current and former automakers in and around Detroit -- almost certainly contributed to Biden's decisive primary victory in this industrial Midwestern state.

Should Biden become the Democratic nominee, which looks increasingly likely after a banner night that included winning crucial Michigan, automakers may also help the centrist former vice president flip the state back to the Democrats in November's election.

Truss accurately predicted Biden would "win Michigan" and take a potentially unassailable lead over his leftist rival Bernie Sanders on the march to the Democratic nomination, he told AFP in an interview.

The 53-year-old African American is a production technician at Ford's Dearborn Diversified Manufacturing Plant and a member of the influential United Auto Workers union.

Detroit is the birthplace of the auto industry and it wears its status as "Motor City" proudly.

"They're definitely going Democrat," Truss said of several coworkers who told him they voted for Trump in 2016 and will not do so again.

"Trump will not win Michigan this time around."

Trump won Michigan by a sliver in 2016, flipping the battleground that had voted Democratic in the previous six presidential elections, in part by claiming he would bring manufacturing jobs back to suffering industrial states.

The administration touts impressive economic numbers including low unemployment. But the auto industry, despite recent record profits, has seen its employee numbers dive over the past few decades.

Two decades ago General Motors alone had 450,000 workers, while today's entire UAW membership is roughly 130,000, noted Frank Hammer, a 30-year GM veteran who worked at the powertrain plant in Warren, near Detroit, during the glory days of high employment.

"Considering Trump won the state by not even 11,000 votes, there's every possibility that the state goes back in the blue column," Hammer said.

Hammer voted for Sanders, but acknowledges he may be in the minority.

"There's a lot of working friends who now really hate Trump, but can't see themselves voting for Sanders," said Hammer, 76.

"They may end up voting for Biden, or not at all."

Trump does remain popular among significant numbers of employees, the autoworkers said.

The UAW, perhaps eager to avoid the spotlight as it contends with multiple scandals, has not endorsed a candidate this year.

"But my reading is that Biden has gained a lot recently," said retired autoworker Ron Lare, who worked for 30 years at the Ford Rouge Plant in Dearborn.

Biden supporters point to his role in helping orchestrate the Barack Obama administration's 2009 bailout of GM and Chrysler.

But Biden is earning backing not just because he served eight years as Obama's deputy.

They trust he will preserve the private health care insurance programs that UAW negotiated over the years.

"Most blacks in the plant are not for a socialist type president," Truss said.

Outside Chrysler's Warren Truck Assembly plant near Detroit, Felicia Andrews wore her hard hat as she entered the massive complex to begin her afternoon shift on the assembly line.

One hour earlier she voted for Biden.

"I think he does" have autoworkers' support, the 38-year-old said.

"I just don't feel Trump is the best president for us right now."

She opposes the brash New York billionaire in part because he championed Andrews's industry, but then stood by as some facilities were shuttered, including GM plants in Warren and Lordstown, Ohio.

That Midwestern state votes next Tuesday.