Hyundai, General Motors push for flying cars as taxis by 2025

Hyundai is developing flying taxis powered by electric batteries that can transport five to six people from highly congested urban centres to airports.In January this year, General Motors had unveiled a flying Cadillac concept.
By : HT Auto Desk
| Updated on: 15 Jun 2021, 09:04 AM

“Hyundai is ahead of the schedule for air mobility vehicle launches," Hyundai's global chief operating officer, Jose Munoz, said in an interview broadcast on Monday at the Reuters Events Car of the Future conference.

Munoz, who is also CEO of Hyundai North America, previously said urban air taxis would operate at major US airports in 2028 and possibly earlier. He told Reuters on Monday that it might be before 2025.

"We see this market as a significant growth opportunity," Munoz said, adding that he was "very confident" in the development of the technology.

Hyundai is developing an electric battery-powered air taxi that can transport five to six people from the heavily congested city center to the airport. Hyundai has a dedicated Urban Air Mobility Division led by Jaiwon Shin, a former NASA engineer. The Korean carmaker has already pledged to invest about $1.5 billion in urban air mobility by 2025.

General Motors had showcased a futuristic flying Cadillac, a self-driving vehicle which takes off and lands vertically and carries the passenger above the streets and through the air, in January during CES 2021 event. 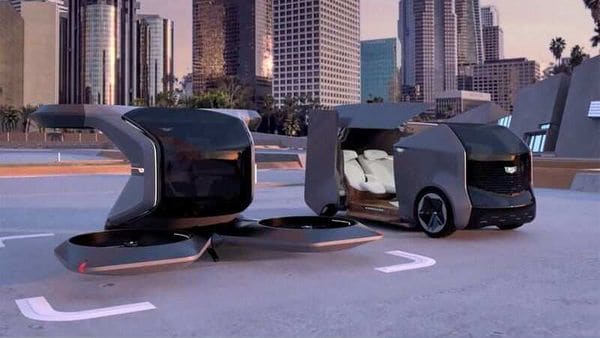 File photo: Two futuristic Cadillac concepts, an electric shuttle and an autonomous vertical take-off and landing (VTOL) drone, are seen in a still image from video presented by General Motors (GM) at the 2021 CES show on January 12, 2021. (GM via REUTERS)

The single-passenger Cadillac - technically, a vertical take-off and landing (VTOL) drone - will be able to travel from urban rooftop to urban rooftop at speeds up to 55 miles per hour.

"This is a very new space. There is a lot of work to be done on the regulatory side, as well as the actual technology side."

Zero-emissions aircraft, which take off and land like helicopters and carry both passengers and cargo, are being developed by a number of start-ups as well as aircraft manufacturers and car manufacturers. However, they face a long road to profitability.

Other automakers developing flying cars, either alone or with start-ups, include Toyota, Daimler AG and Geely Automobile Holdings.