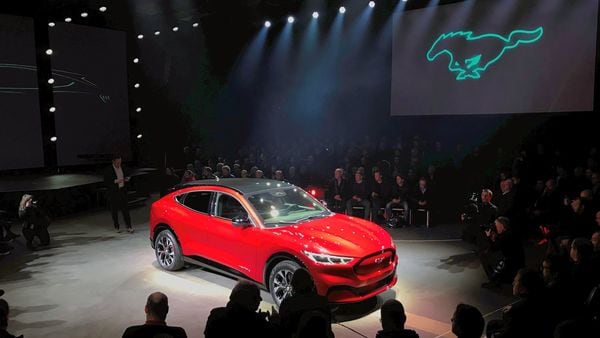 File photo of an electric Mustang Mach-E car is displayed during its launch in Oslo, Norway.

Ford Motor Co and General Motors Co, the top two U.S. automakers, have more than two dozen new battery electric vehicles (EVs) in the pipeline, according to their executives and suppliers familiar with the companies' plans.

Their combined production in North America is expected to total 325,000 in 2026, according to data from AutoForecast Solutions. That will represent about 5% of their total North American production and less than Tesla Inc, the world leader in electric vehicles, produced last year.

Here is a detailed look at Ford and GM's plans for future electric vehicles:

Ford has said it will introduce the Mustang Mach-E, a battery-powered crossover with sports car styling, later this year, as well as an all-electric version of its best-selling F-150 pickup in 2021. Also on tap next year: An electric edition of the full-size Transit van, the company said.

Ford also has confirmed plans to build a luxury Lincoln crossover on a battery-powered platform provided by Rivian, the Michigan-based electric vehicle startup that is also supplying Amazon.com Inc. The big Lincoln is due in 2022, according to suppliers.

The automaker also has plans to introduce two new midsize electric crossovers, one each for the Ford and Lincoln brands, in 2023, suppliers said.

GM has revealed one of its future EVs — the Cruise Origin self-driving shuttle — and shared details in early March with analysts and media of 13 other future EVs for the Buick, Cadillac, Chevrolet and GMC brands. Suppliers familiar with GM’s plans have shared additional details.

Buick is planning to introduce a midsize crossover and a companion SUV in 2023, the automaker said. It also expects to launch a compact crossover about the same time, according to suppliers.

Chevrolet said a facelifted Bolt EV and a slightly larger model, the Bolt EUV, will go into production next year. The next-generation Bolt is due in 2023. GM displayed a midsize Chevrolet SUV, due in 2023, that will be joined a year later by a compact crossover, according to suppliers. GM has said a full-size electric pickup is just around the bend — 2023, suppliers said.

The GMC brand is getting a new sub-brand — Hummer — on two electric models, a large pickup truck and a slightly smaller SUV, GM has said, the former in late 2021, the latter in early 2023. Look also for a 1,000-horsepower performance variant of the Hummer pickup in 2022, which GM has teased. GMC also expects to get compact and midsize electric crossovers in 2025, according to suppliers.

Ford and GM have provided few details of where their electric vehicles will be made.

Production in North America will be spread among six plants, according to research firm AutoForecast Solutions, which monitors automakers' plans.

Ford will run four plants, including two in Mexico, where electric and gas-engine vehicles will be built under the same roof. GM will run two dedicated EV plants, both in Michigan.