The Splendor bikes were placed with precision to form the Hero MotoCorp logo at the company's manufacturing facility in Andhra Pradesh's Chittoor.
By : HT Auto Desk
| Updated on: 10 Aug 2021, 08:54 PM 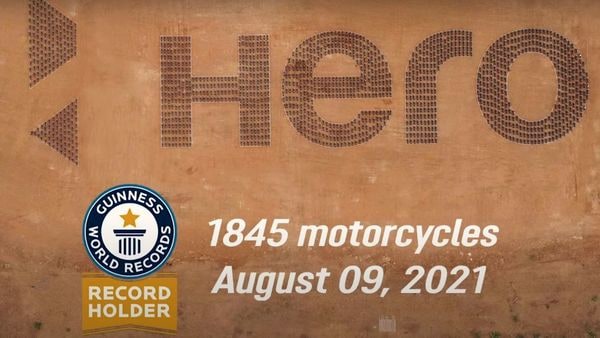 The Hero MotoCorp logo formed by the Hero Splendor bikes.

Hero MotoCorp on Tuesday informed that it has entered the Guinness World Records for creating the largest ever motorcycle logo. Hero MotoCorp achieved the feat by placing exactly 1,845 of its Splendor motorcycles to mark 10 years' journey as a solo entity.

The Splendor bikes were placed with precision to form the Hero MotoCorp logo at the company's manufacturing facility in Andhra Pradesh's Chittoor. The canvas for the logo was an area measuring 1,000 feet by 800 feet.

It isn't a ride in the park to place these many vehicles to form a logo. According to Swapnil Dangarikar, Official Adjudicator from Guinness World Records, it takes a mammoth effort to achieve the objective. "The attempt for the largest motorcycle logo is always a challenging one. It involves immense planning and effort in execution," he said. "I reviewed the entire evidence online and I am very happy to announce that Hero MotoCorp has broken this record with 1,845 motorcycles in a stunning manner."

For Hero MotoCorp, it was a dual celebration. "At the beginning of this year, Hero MotoCorp celebrated the landmark of 100 Million cumulative sales since inception- a record in the heart of all the Heroes," said Malo Le Masson, Head of Global Product Planning and Strategy, Hero MotoCorp. "This milestone comes in 2021 which is also the 10th anniversary year of the Hero Brand logo, unveiled on 9th of August 2011 at the O2 Arena in London."

Hero MotoCorp is the world's largest manufacturer of two-wheelers.