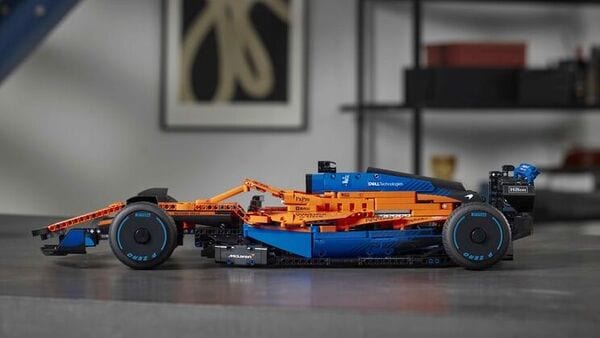 Side view of LEGO Technic McLaren Formula One race car

LEGO Technic has partnered with McLaren Racing to introduce a one-of-a-kind McLaren Formula One race car, paying homage to the team's iconic 2021 season livery. The LEGO model comprises 1432 pieces and with its exquisite design and functionality, it looks just like its real-life counterpart.

The LEGO technic version of the McLaren masterpiece has been fully modelled on the real-life version of the track car, featuring a V6 cylinder engine with moving pistons, steering activated from the cockpit, suspension and differential. Being the first LEGO Technic version of a Formula One race car, the set offers quite a thrill to F1 enthusiasts.

The LEGO set offers a relaxing, hands-on and focused building activity for both kids and adults, helping them explore their passion for the sport. Once built, the LEGO model measures over 13 cm high, 65 cm long and 27 cm wide, and also features sponsor stickers, making it a display piece to cherish.

The LEGO Technic McLaren Formula One race car will be available globally from March 1 on LEGO.com, in LEGO stores and other retailers globally as well as McLaren’s worldwide retailer network for € 179,99. “The partnership between the LEGO Group and McLaren continuously develops each time we get together for the next collaboration. We never stop trying to excite and inspire our fans by pushing the limits of possibility," said Niels Henrik Horsted, Head of Product, LEGO Technic.