Home Auto News Is Gm Vs Tesla War For Electric Batteries Much Like Android Vs Iphone Contest?

Is GM vs Tesla war for electric batteries much like Android vs iPhone contest?

For General Motors, or any other automaker that wants to take on Tesla in the EV race, the battery pack is of vital significance.
By : Bloomberg
| Updated on: 06 Mar 2020, 02:04 PM 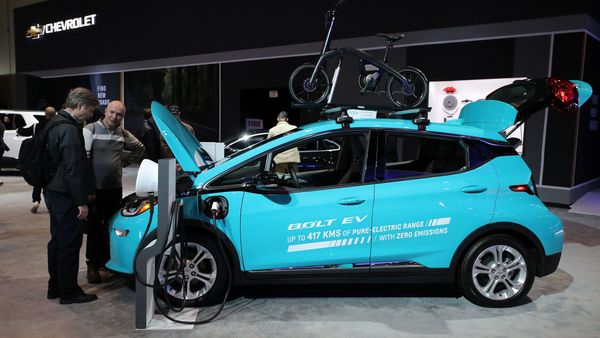 Visitors look at an electric 2020 Chevrolet Bolt at the Canadian International Auto Show in Canada.

General Motors Co. has made close to $50 billion in adjusted net income over the past five years, while Tesla Inc. has lost close to $5 billion. Yet investors believe Elon Musk’s carmaker is the stock to own on the assumption that he has a nearly unassailable lead on all challengers when it comes to electric cars.

On Wednesday, GM Chief Executive Officer Mary Barra and the team from her skunk works in GM’s Technical Center north of Detroit made a case that they can catch up to and maybe even pass Tesla in the race to electrification. GM thinks it has a killer app in a battery platform that reduces the use cobalt, one of the more expensive elements needed to store energy, and has a Lego-like structure that can be shrunk down or expanded double as the chassis for anything from a compact Chevrolet Bolt hatchback to a 1,000-horsepower Hummer pickup.

For GM or any other automaker that wants to take on Tesla in the EV race, the battery is vital. Its cost can put the car out of reach for many consumers and undermine its chances of profitability before the vehicle ever reaches a showroom. And by Barra’s admission, if that battery can’t make a car go 300 miles on a single charge—a bragging point that only Tesla has with any model on sale right now—most consumers won’t consider it. But if GM pulls off this battery coup, and consumers are persuaded to come along, the Detroit automaker may have what established carmakers have been seeking for several years—an Android-like antidote to Tesla’s position as the iPhone of electric cars.

“What matters more than anything is battery cost. If you can get cost down, you can get better range. The big automakers like GM have an advantage in scale and global reach," says Colin McKerracher, head of transport analysis for BloombergNEF. GM has made it clear, he says, that “they aren’t giving up."

Today, GM sells the electric Chevy Bolt, and newer entries include Audi’s e-Tron and Jaguar’s I-Pace. None of these models have dented Tesla’s global lead, which amounted to 368,000 EVs sold globally last year, more than triple the number of the next challenger, China’s BAIC. But give GM its due. It’s been working on electric cars since the EV1 went on sale in 1996. The carmaker put out the Chevy Volt plug-in hybrid in late 2010; it has deep expertise. But Tesla stole the show with the Model S sedan in 2012, and the rest of the industry has been wondering how to strike back ever since.

Here’s how GM’s new system works and why management says the company can get back in the game:

“Tesla has an advantage in brand value and a bit of a technology edge, but I wouldn’t count GM out," BloombergNEF’s McKerracher says. “They are making all of the right moves to be competitive."