Fuel-cell powered BMW i Hydrogen NEXT inching closer to reality

The BMW i Hydrogen NEXT will be equipped with a hydrogen fuel cell e-drivetrain that only emits water vapour.The fuel-cell vehicle will also feature a high-voltage battery pack that can be used to deliver extra power when accelerating.
By : HT Auto Desk
| Updated on: 04 May 2021, 02:14 PM 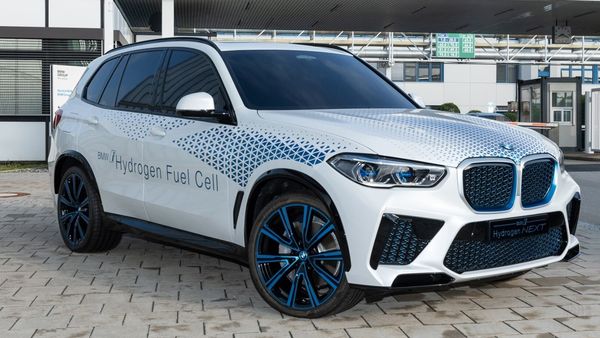 ﻿BMW i Hydrogen NEXT

BMW will begin the small series production of its fuel-cell powered i Hydrogen NEXT late next year. The car will be based on the BMW X5 and feature two carbon fiber reinforced plastic tanks, holding a total of six kilograms of hydrogen.

The i Hydrogen NEXT will be equipped with a hydrogen fuel cell e-drive that only emits water vapour. The hydrogen is used to generate electricity, which powers a rear-mounted electric motor that produces up to 369 hp. The fuel-cell vehicle will also feature a high-voltage battery pack that can be used to deliver extra power when accelerating, serving as a performance buffer.

BMW says that it is building on its experience with fifth-generation e-drives to develop this vehicle. The carmaker notes that hydrogen-powered vehicles have a number of advantages over even electric battery-powered ones such as quick refueling times. Noting the limitations of infrastructure for smoothly switching to hydrogen-powered vehicles, BMW says that "the conditions needed to be able to offer BMW Group customers a hydrogen vehicle are not yet in place". It noted that there is a lack of hydrogen refueling infrastructure and said that “green hydrogen must be available in sufficient quantities and produced at competitive prices."

Another challenge with fuel-cell vehicles is that conditions for their operation will develop differently around the world, making it hard for automakers to launch such vehicles because they are only practical in certain markets and sometimes only in sub-sections of the those markets.

However, keeping up with its CO2-free drive technologies goals, the company has been working the hydrogen technology for over 40 years and with the fuel-cell technology for for 20 years. The company believes that the hydrogen vehicles can play an important role in the growth of e-mobility and will become an additional option in the long term.