Home Auto News Ford To Test If Its E Truck Can Light Up Your Home During Storms, Wildfires

Ford to test if its e-truck can light up your home during storms, wildfires 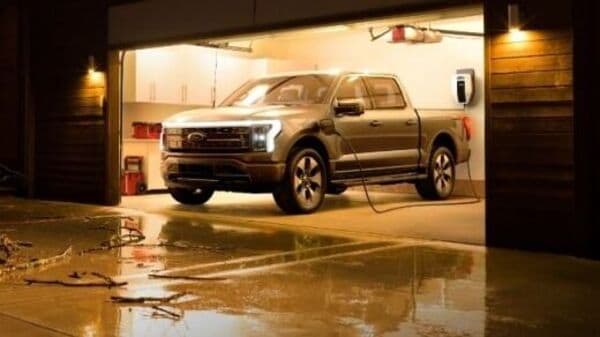 Ford Motor Corp. has been touting the ability of its F-150 Lightning electric pick-up truck to power homes during outages for some time now. Ford has now partnered with PG&E Corp. and will test the viability of the EV powering homes in California where storms and wildfires often cause a blackout that lasts for days on end. PG&E or Pacific Gas and Electric Company are one of the US' largest natural gas and electric energy company.

Ford CEO Jim Farley Jim Farley reportedly confirmed that the company wants to check if its F-150 Lightning can return power to homes and also connect to the main grid. PG&E will make use of five of these EVs to test this.

The Ford F-150 Lightning makes use of a special and highly-capable battery that can be deployed as an alternate power source. The US auto giant has already showcased and launched a bi-directional home charging station.

At $1,310 (approximately ₹1 lakh), the Ford Charging Station isn't exactly affordable but the company is underlining its use-case application to offset the upfront cost. Rated at 80 amp, which is twice the capacity of an average charger and it also enables Ford’s Intelligent Backup Power bi-directional charging capacity. The system can provide up to 9.6 kW to your home when combined with Ford’s Home Integration System during the installation.

And in California where EVs are gaining quick-paced traction, such a system is being touted as an effective strategy to not just bring down range-related anxieties but also combat power shutoffs in case of wildfires and storms.