Located at a 300-hectare site in the municipality of Grünheide, construction of Tesla's Gigafactory Berlin-Brandenburg began earlier this year and is expected to be completed at some point in 2021.
By : HT Auto Desk
| Updated on: 15 Jul 2020, 16:34 PM 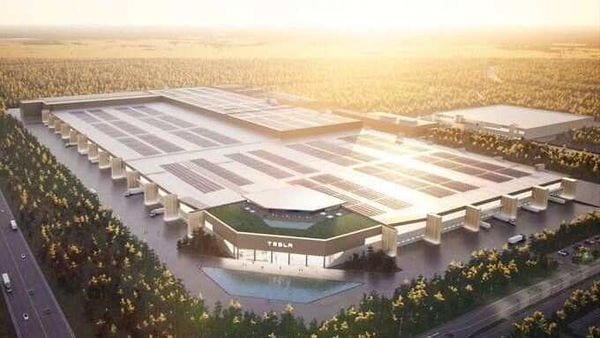 This photo was tweeted by @elonmusk

Elon Musk on Wednesday took to Twitter to share a render image of Tesla's upcoming Gigafactory in Berlin and the photo showcased the grand scale of the facility in all its glory.

Similar to Gigafactory in Shanghai, the facility in Berlin also promises to stand out in an open land area and will reportedly manufacture only Model Y SUVs initially. With a swimming pool on the rood and covered end-to-end with solar panels, the facility promises to have a futuristic visual and architectural appeal.

As per plans, the Gigafactory will give special emphasis to efficiency, complete with loading bays all around for trucks. "We aim to maximize the benefits of the location’s excellent passenger and freight rail connections, by building an on-site rail freight yard, and making it as attractive as possible to commute to the factory by rail," Tesla's official statement on the facility reads.

Located at a 300-hectare site in the municipality of Grünheide, construction of Gigafactory Berlin-Brandenburg began earlier this year and is expected to be completed at some point in 2021. The EV maker says that an expected 12,000 engineers, production leaders, associates and technicians will be employed in the first phase.

There have been some roadblocks too with reports of trees in the area being felled in order to make space for the facility. Many local residents took out protest marches against these instances but it appears that all the differences have now been ironed out.