Elon Musk beats Mukesh Ambani to become fifth richest billionaire, for a while 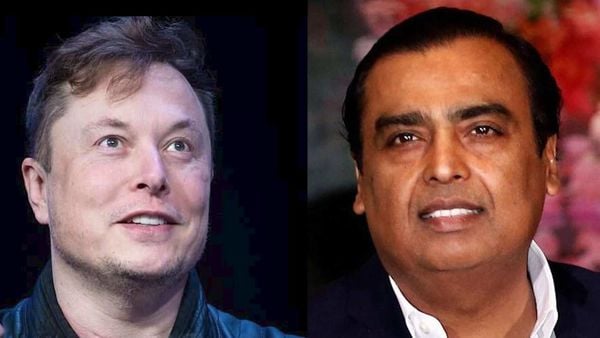 Amid soaring price of Tesla shares, the CEO of the electric carmaker breached the top five list of richest persons in the world for brief period of time, beating Reliance chairman Mukesh Ambani. (File photo)

Elon Musk is getting richer by day. Amid soaring price of Tesla shares, the CEO of the electric carmaker breached the top five list of richest persons in the world for brief period of time.

Elon Musk’s net worth reached $74 billion, putting him ahead of other billionaires on Forbes list like Warren Buffett and chairman of Reliance Industries Mukesh Ambani.

However, as Tesla share prices fell slightly, Musk was back at number eight on the list of billionaires once again. Earlier this month, Musk had become the seventh richest billionaire in the world. The fortune of Tesla founder rose $6.1 billion after the carmaker’s stock surged 11%. Musk overtook tech titans Larry Ellison and Sergey Brin.

Tesla share prices has almost quadrupled since the beginning of the year, from $430 to more than $1,500. Tesla overcame the Covid-19 shutdown at its US assembly plant to post a surprising $104 million net profit for the second quarter.

The company said its progress in the first half of the year has positioned it for success in the second half as production output continues to improve. Telsa also said it has picked a site for its second U.S. assembly plant, although the location wasn't released. The Austin, Texas, area appeared to be the front-runner but Tulsa, Oklahoma, was a possibility.

Tesla would have lost money, though, without $428 million it earned from selling electric vehicle credits to other automakers so they can meet government fuel economy and pollution regulations.