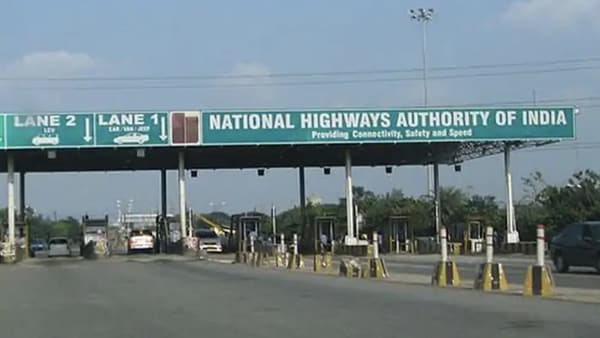 New Delhi, Nov 21 (PTI) Twice the toll amount will be charged from December 1 for passing through FASTag lanes without the tags at toll plazas on national highways, Union Minister Nitin Gadkari said on Thursday.

From December 1, toll payments will be made only through FASTags under the National Electronic Toll Collection (NETC) programme, the flagship initiative of the Ministry of Road Transport and Highways.

However, there will be one hybrid lane, where usual toll will be charged from non-FASTag vehicles.

"Double the toll amount will be charged from December 1 for travelling through FASTag lanes without tags on 537 toll plazas on national highways across India," Road Transport and Highways Minister Gadkari said here.

He said 537 toll plazas have become 100 per cent electronic toll collection compliant including 17 where FASTags will be read through hand-held devices.

The government had already decided that from December 1, toll payments will be made only via FASTag under the National Electronic Toll Collection (NETC) programme, the flagship initiative of the Ministry of Road Transport and Highways.

FASTag is a prepaid tag, affixed on vehicle's windscreen, that enables automatic deduction of toll charges and lets the vehicle pass through the toll plaza without stopping for the cash transaction.

The programme is being implemented pan-India to remove bottlenecks and ensure seamless movement of traffic. However, the Centre has decided to keep one lane as hybrid lane which will accept FASTag as well as other modes of payment.

Gadkari said that to promote FASTags, the National Highways Authority of India (NHAI) will distribute it free of cost bearing ₹150 security charges for buyers till December 1. However, it is up to the buyer to charge it with desired amount, he said and added that after December 1, the FASTags will become chargeable.

Gadkari said the NHAI's annual income is expected to touch ₹1 lakh crore in the next five years.

He added that toll revenue of the NHAI is expected to touch ₹30,000 crore in the next two years.

Gadkari said the NHAI has no financial problem and added that the third bundle of highways under TOT (toll, operate and transfer) fetched ₹5,011 crore on Wednesday with Cube Highways emerging as the winner

NHAI Chairman SS Sandhu said the fourth round of TOT bundle is expected to be auctioned by the end of the current financial year.

On Wednesday, the minister has emphasised that the projects should be implemented in the spirit of minimising waiting period at the toll plazas, so that the users benefit in terms of fuel and time saving, while the society benefits in terms of reduced vehicular emission.

Peeyush Naidu, partner, Deloitte India, said, "(It) is a welcome step that will influence congestion, positively impacting experience, overall travel times for commercial vehicles that pass through several such plazas, as well as emissions from idling vehicles at such plazas."

He also said the associated data can also be analysed to support other traffic as well as infrastructure planning measures.