New Delhi: A security official stands guard at Rajpath during the rehearsals for Republic Day Parade 2021, in New Delhi.

Thousands of armed personnel have been deployed at the Rajpath and several border points of the national capital which has been brought under a multi-layered security cover in view of Republic Day celebrations as well as the proposed tractor parade by farmers on Tuesday.

Protesting farmer unions opposing the three contentious farm laws said their parade will not enter central Delhi and it will start only after the official Republic Day parade concludes.

The unions claimed that around two lakh tractors are expected to participate in their parade which will move into the city from three border points --- Singhu, Tikri and Ghazipur (UP Gate).

For Republic Day celebrations, an official said around 6,000 security personnel have been deployed to maintain vigil. Facial recognition system of Delhi Police has also been set up at vantage points for suspect identification, the official said.

Checking and frisking staff deployed at Rajghat will be done by personnel in PPE kits, with mask and face shield, keeping in line with Covid-19 protocols, official said.

On Tuesday, sharpshooters and snipers will be deployed on top of high-rise buildings to keep watch on the eight-km-long parade route from Rajpath.

A five-layer security cover comprising of border pickets, inner, middle and outer security has been deployed in and around the city to maintain law and order during the Republic Day ceremony and the proposed tractor parade, a senior police officer said. 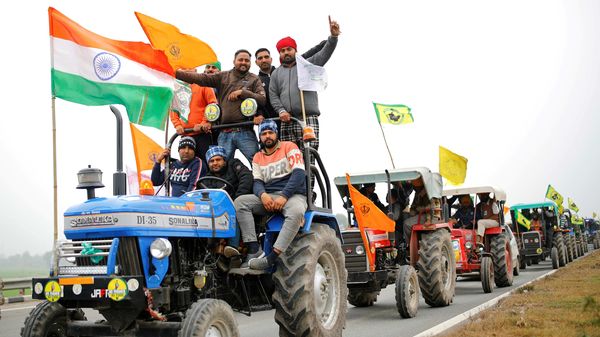 Following Covid protocols, only 25,000 people will be allowed to attend the ceremony at Rajpath as opposed to over one lakh spectators who usually attended the event every year, he said.

The parade will also be shorter this year. Instead of marching up to Red Fort, the parade will end at National Stadium and only the tableaux will be allowed to perform at Red Fort, he also said.

"We have 140 CCTV cameras across Republic Day parade route and along the enclosures. We have identified and set up facial recognition system at 30 identified spots at the Rajpath from where public would enter.

"This system is fed with a database of nearly over 50,000 people including that of suspected terrorists, criminals and anti-social elements," said another senior police officer.

To maintain law and order during the farmers' tractor parade, thousands of security personnel have been already deployed at several border points.

Deependra Pathak, Special Commissioner of Police (Intelligence), claimed on Sunday that over 300 Twitter handles have been generated from Pakistan to disrupt the tractor parade.

In a circular, Delhi Police Commissioner S N Srivastava directed all officers and personnel, as well as Central Armed Police Forces (CAPF), posted for the Republic Day Parade security arrangements to be prepared for an extended deployment to maintain law and order in the wake of the tractor parade.

"Over 300 Twitter handles have been generated from Pakistan during January 13 to 18 to disrupt the tractor rally by farmers by misleading people. There are inputs about the same from different agencies too.

"It will be a challenging task for us but the rally will be conducted amid tight security after the Republic Day parade is over," Pathak had said at a press conference.

Farmer leaders have appealed to those participating in the tractor parade to carry enough ration for 24 hours and ensure that the rally remains peaceful.

"No one should carry any weapon or drink alcohol. Banners carrying inciting messages are not allowed," a farmer leader said.

Tractors starting from Ghazipur will drive through Apsara border, Hapur road and Lal Kuan. Covering 68 kilometers, it is the longest route for the march.

The farmer leaders will be on the frontline in their cars.

All vehicles will have to return to the originating place. No one will try and stop midway without a valid reason, the farmer leaders said. Each tractor will carry a tricolour and there will be folk music and patriotic songs.

Enacted in September last year, the three farm laws have been projected by the Centre as major reforms in the agriculture sector that will remove middlemen and allow farmers to sell their produce anywhere in the country.

However, the protesting farmers have expressed their apprehension that the new laws would pave the way for eliminating the safety cushion of minimum support price and do away with the 'mandi' (wholesale market) system, leaving them at the mercy of big corporates.