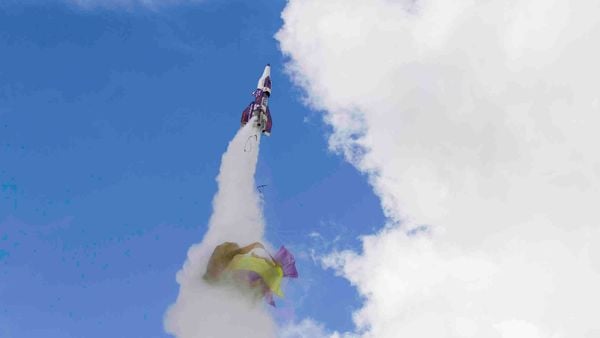 Mad Mike Hughes rocket takes off, with what appears to be a parachute tearing off during its launch near Barstow, California.

Daredevil 'Mad' Mike Hughes, 64, was known to make full-size limousine fly like a frisbee disc over distances that earned him a place in the Guinness World Records. In fact, a video of him driving a Lincoln Town Car stretch limo and making it jump 103 feet back in 2002 is still quite viral online. A man known for pushing the boundaries of physics as well as physical human limitations, Hughes met with a tragic end recently when a home-made rocket he attempted to take off in, crashed shortly after launch.

US media reported that Hughes had attempted to launch himself in the custom-build rocket in a bid to see for himself if the Earth was indeed round. A steel ladder attached to the rocket - for Hughes to use to enter it - was the main reason. It is being reported that the rocket hit the ladder moments before propelling upwards and this caused a tear in the parachute can. Reports quoting eyewitness accounts suggest that the rocket was in air for about half a minute before nosediving.

People associated with the launch said that Hughes had hoped to reach an elevation of 5,000 feet but the fateful rocket did an arc before coming down hard. Medical teams which reached the crash site declared Hughes dead.

This was not the first such attempt from Hughes. He had reportedly tried a similar launch in 2018 and had even managed to reach an elevation of about 1800 feet.

In fact, Hughes had come a long way from his 'flying limo' days and had begun earnestly pursuing a dream of flying in rockets. Reports suggest that he often suffered from back pain but was too much of a daredevil to let it get the better of him.