Home Auto News Coronavirus: Why Making Ventilators Is A Tough Challenge For Carmakers

Coronavirus: Why making ventilators is a tough challenge for carmakers

The same disruption the coronavirus pandemic has wrought on automakers’ global supply chains will apply equally to their efforts to make ventilators.
By : Bloomberg
| Updated on: 08 Apr 2020, 11:00 AM 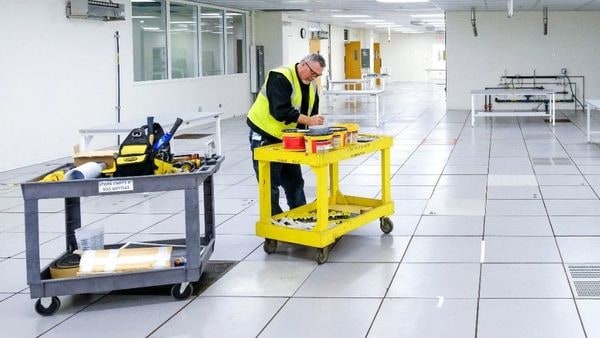 Work being done at the General Motors manufacturing facility in Kokomo, Indiana, where GM and Ventec Life Systems are partnering to produce Ventec VOCSN critical care ventilators in response to the Covid-19 pandemic.

In the face of a global health emergency, automakers are stepping in — or being summoned — to make ventilators. Can they manufacture at the scale required, with the world needing a 10-fold increase in production to cope with the surge in coronavirus infections? It will be a severe challenge.

Car companies such as Ford Motor Co., General Motors Co. and Toyota Motor Corp. are a natural choice to mass-produce these medical devices. They churn out millions of vehicles every year, procuring and bringing together hundreds of parts from around the world at rapid speed. Ventilators needs anything from 400 to 1,000 components from tubes and sensors to pressure valves, humidification systems and filters. There is significant overlap between the engineering of ventilators and cars, which both bring together electronic, electric, hydraulic and mechanical aerodynamics expertise.

The parts are mostly different, though. The constituents of a ventilator come from dozens of countries and through as many as nine layers of suppliers. At the same time, some specialty components, such as oxygenation membranes needed for mechanical ventilation, are made by only a few precision manufacturers— meaning that any attempt to effect a rapid expansion in global production is constrained by the ability of these companies to ramp up.

The same disruption the coronavirus pandemic has wrought on automakers’ global supply chains will apply equally to their efforts to make ventilators. In normal times, such a switch might be feasible. However, automakers are only in this position because conditions are so abnormal. The coronavirus has wreaked havoc on supply chains. Logistics, transportation and manufacturing have been upended. Retooling factories will take time and the disease won’t wait.

That makes the task even more formidable for companies such as Ford and GM, which have faced pressure from President Donald Trump to move more quickly and repurpose factories to turn out ventilators. Trump invoked the wartime Defense Production Act last week to help ventilator manufacturers procure supplies. Still, the administration’s effort doesn’t cover the full chain from raw materials to distribution, as my colleague Brooke Sutherland has written.

The U.S. may need as many as 960,000 ventilators, the Society of Critical Care Medicine estimates, versus 200,000 that are available. India’s requirement is as many as 220,000 compared with an estimate of about 25,000 now, according to the Brookings Institution. These numbers depend on the speed of the disease’s spread and the severity of infections, and can change rapidly.

Big manufacturers currently produce around 200 ventilators a week and need to make 10 times that number, according to Bloomberg Intelligence industrials and medical equipment analyst Nikkie Lu. The Indian government is urging local automakers to get involved. In the U.K. and Europe, the likes of McLaren Automotive Ltd. and Mercedes AMG High Performance Powertrains Ltd. are helping out.

GM is sourcing 419 direct parts from 91 so-called tier-1 suppliers for ventilators made at its Kokomo plant in Indiana. While a significant portion are produced in North America, there are suppliers in more than 10 countries including China. GM is helping increase sourcing capacity within the supply chain of its ventilator partner Ventec Life Systems Inc., and is having to develop new sources of parts in its own.

While China is reopening for business and putting a priority on medical equipment, other countries are in lockdown. That’s making it increasingly tough to get the right products to manufacturers, particularly where operations are dispersed. For example, New Zealand ventilator maker Fisher & Paykel Healthcare Corp. sources components from China for manufacture at home and in Mexico. ResMed Inc., a San Diego-based company that makes a ventilator used during the severe acute respiratory syndrome outbreak, does most of its manufacturing in Singapore and Sydney.

There are other obstacles. This is a niche industry that’s complex and highly regulated. China has more than 20 mechanical ventilator makers that produce about 2,200 machines a week or about a fifth of total global output; only eight are certified to sell in Europe. Medical devices need to be produced in sterile and clean-room certified conditions. That means converting factories to scale up isn’t a simple matter. In recent weeks, some countries have complained of faulty tests and medical equipment coming from China. Officials there banned the export of medical supplies that don’t meet China’s standards.

Then there’s protectionism. Trade barriers are going up in dozens of countries as the world moves into survival mode. Having shipped key medical supplies abroad going into the crisis, the U.S. has now joined the trend, using the defense act to order 3M Co. to halt exports of its protective masks to some nations and prioritize sales to the federal government.

The U.S.-China trade war had already showed up the fragility of global supply chains. Covid-19 and the rush to make ventilators will be a telling marker of how effectively they still function. Conditions could hardly be more difficult for such a critical test.